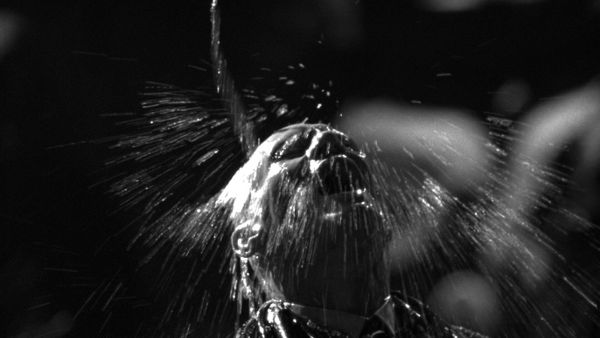 Dark, demonic and weirdly witty: Edgar Pera’s The Baron is an experiment in neuro-Gothic horror based on the novel by Branquinho da Fonseca and inspired by a film destroyed in the 1940s by the Fascist dictatorship under Salaza – who in the same amusing vein met his death falling off a deckchair.

Edgar Pêra shot the images and then apparently waited for the footage to lead his imagination into a world of ghastly horror surrounding a visit of a school inspector to the strange and beastlike Baron played masterfully by his longtime collaborator Nuno Melo whose hypnotic chant ‘Aqui Quem Manda Sou Eu’ (I’m the one in charge here) will haunt you, pavlonian-style long after the closing titles roll.

To Edgar Pêra sound is a vital element in his films: here in this low budget piece, the soundtrack is crucial in conjuring up a highly mystifying atmosphere to a simple storyline that echoes Mary Shelly’s Dracula. Pêra has Costa Gomes’s script to hand but uses it for reference only so the dialogue is largely improvised. The Baron himself is a Portuguese Nosferatu with Nuno Melo’s butch bone structure playing the leading role in contrast to Klaus Kinski shard-like talons and tombstone teeth. Rather than a hovering, tentative ghoul, he has a frighteningly dominatingly physicality and Kafkaesque presence and is clearly also a womaniser strangely under the thumb of his maid Idalina, played with succubus-like charm by Leonor Keil. If you do get a chance to see this one, grab it! MT