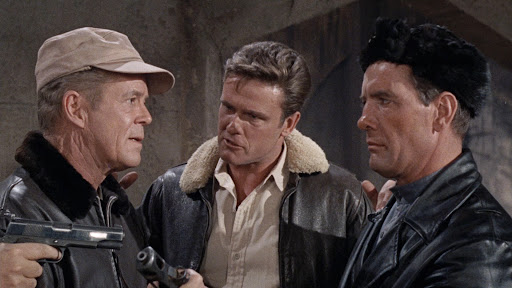 The Bamboo Saucer attempts far more than its obviously tiny budget can manage, and at 100 minutes takes much too long to deliver too little. Writer-director Frank Telford’s garrulous script feels like one written in the fifties that took ten years to get made – so was then brought up to date by making Red China rather than the Russkies the heavies. A competent cast led by the late Dan Duryea does their best, and Lois Nettleton as a hot Russian scientist with lovely blue eyes gamely spouts some particularly atrocious dialogue. (There’s a lot of Russian dialogue in the script; and it would be interesting to learn what a native Russian speaker makes of her accent and how convincing the dialogue spoken by her and the other actors playing Russians actually sounds.)

Competently lit in an overlit TV movie sort of way by twice Oscar-winning Hollywood veteran Hal Mohr, the ‘Chinese’ locations resemble an episode of Star Trek and the Chinese church where much of the action is played out is presumably a standing set from something made earlier. But where the corner-cutting really shows is in the dreadful music score and the perfunctory special effects. The score is obviously carelessly selected odds and sods taken from a library when a halfway decent score would have generated a bit of much-needed atmosphere to make up for the slack pacing. And the special effects are spectacularly inadequate.

The budget evidently didn’t exist for the design and construction of a full-sized flying saucer exterior for the studio scenes, so we instead get a flatly lit superimposition that looks even worse than Edward D. Wood Jr’s notorious hub-caps of ten years earlier. When the thing finally takes off, the flight to Saturn and back (aided by shots of outer space, the Moon, Mars and so on presumably lifted from other films) certainly makes for a final ten minutes that is fascinating for what it attempts with so little. @Richard Chatten