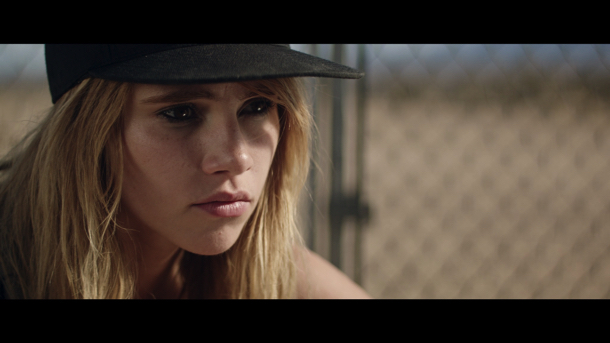 A girl walks out alone into a psychedelic desert of cannibals and crazed criminals in Lily Amirpour’s startling but generic follow up to her standout vampire drama A Girl Walks Home Alone at Night making this a visually exciting but narratively torpid experience despite its Mad Max pretensions. The Bad Batch is a brutal and bewildering blowout of surreal and dreamlike sequences that plays with some exciting toys but they all belong to other filmmakers such as Alejandro Jodorowsky, Robert Rodriguez and even Arturo Ripstein.

Outstaying its welcome at nearly two hours, the slim narrative wreaks of genetic or ethnic cleansing and suffers from longueurs, but the buzzy and inventive visuals make it almost worth the ride. Performances are adequate from the ensemble cast; the standout being Keanu Reaves who plays an almost sympathetic cult leader called The Dream. Ex-model Suki Waterhouse looks the part and is adequate as Arlen, the heroine loses an arm and a leg at the start of her journey into a dystopian, incandescent hell of lurid lights, surreal encounters accompanied by a sparky selection of eclectic tunes including All That She Wants, tracks from Chilean artists Darkside, South African hip-hop band Die Antwoord, and indie ambient musician Francis Harris..

After escaping from a penitentiary’s ‘bad-batch’ (delinquents) into the Texan desert, she is abducted by cannibals and maimed for their tea. Being a spunky girl with taut abs, attitude and ‘fear’ tattooed on her fingers, she escapes on a skateboard and is picked up by Jim Carey’s mute wayfarer who takes her in his shopping trolley to the Comfort community who dwell in a walled city where she is equipped with a prosthetic leg and so on. Her search for a suitable soul mate (no kidding) makes her yearn for love and a stocky Mexican called Miami Man could be the answer, but remember – this is dystopia.

The Bad Batch looks sensational and offers light-hearted fun while it lasts but its emptiness leaves you unsatisfied when the titles roll. MT