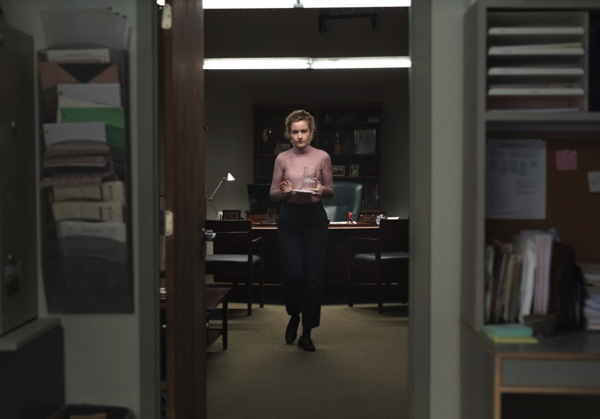 The Assistant follows the day to day life of an office worker during her trial period in a new company. The film captured the imagination of critics in Berlin this year when a rumour went round it was based on the empire of one Harvey Weinstein, the disgraced film producer, and so plausibly chimed with the #MeToo movement. Although the setting here is New York.

Jane is a rather glum and introverted character who never smiles or shows a spark of enthusiasm or enterprise when she lands her dream job, beating hundreds of others to the post as a production company assistant. We first see her outside her Queens apartment, where a cab is waiting to drive her to the office in the early morning. Shot in a subdued colour palette, this is a tonally subdued affair that sees the film’s executives deeply involved in their workload; not a sparky creative atmosphere – so clearly the action takes place in the ‘backroom’ ie the legal or administrative side of the business – although this is never made clear.

Jane is a diligent and dedicated worker who maintains a sombre presence, rarely smiling and rocking a drab teeshirt, and dowdy trousers as her work outfit, her pop-socks drifting down to show her bare ankles as she goes about the daily routine of checking travel itineraries, photocopying, and making refreshments in the large office she shares with two other more senior assistants who are mostly absorbed in their own work. Her own poker-face certainly doesn’t invite a positive dynamic between them, and none of these characters has any chance to inject a sardonic twist to their performances given the dumbed down almost monosyllabic dialogue.

Although clearly a film with a serious and worthwhile message to offer, as a piece of entertainment  The Assistant is light years away from its obvious companion drama The Devil Wears Prada, a more sparky affair with some fireworks and fun and games up its sleeve, although roughly the same agenda.

The Australian filmmaker Kitty Green is best known for her strong documentaries The Ukraine is Not a Brothel (2013) and Casting JonBenet (2017) but her first stab at drama is a damp squib. One wonders if she has ever worked in the back offices of a production company dealing with the humdrum daily details such as transportation, logistics and facilities management. Clearly she has based her script on interviews gleaned from office workers, and although Jane’s work environment makes no attempt to set the night on fire, Green’s treatment is so bland and lacklustre, the only spirited performance coming from a cheerfully pragmatic Matthew Macfadyen as Wilcock, head of personnel.

Jane’s boss, Tony Torn, never appears but we certainly get a jist of his iron fist on his staff through various ‘phoncalls. But this could be any office, in any town, in any country with a strong hierarchy and a bottom line driven by profit and a need to deliver. And besides, Jane has no backlife, as far as we’re led to believe, apart from the final scene where she receives a loving phone call from her father, just as warm and convincing as the rest is cold and alienating. This brief scenes is the only tonal shift in the narrative. Other moments like this, amid the buttoned down drabness, could have added dramatic tension – and a more enjoyable outcome.

The fact that Jane is chauffeur-driven to work is a perk that many office workers would welcome, as they tool in from the suburbs to put in the hours in another gruelling day. This is what work is like for most people. It is not a party, but a hard graft to the top – and the only thing that can make it enjoyable is the positive attitude and determination that you bring with you to work. And Jane seems an isolated character whose simmering discontent comes to a head when a new assistant Sienna (Kristine Froseth) appears on the scene and appears to receive a more favourable reception. Sienna is just as pretty, but perkier, and brings a breath of fresh air to proceedings. Although Jane assumes that – wrongly or rightly – through a few randoms clues, that the young girl from Boise, Idaho, is a product of the casting couch. But because Jane has no confidents – in or out of the office – this strand cannot proffer any grist to her character’s mill to empower her. And this is the big flaw in Green’s script. Although our sympathies should be with her, she emerges an irritating morose, moaner by the end of the story: is that really what Green intended? Certainly a film to set tongues wagging. MT