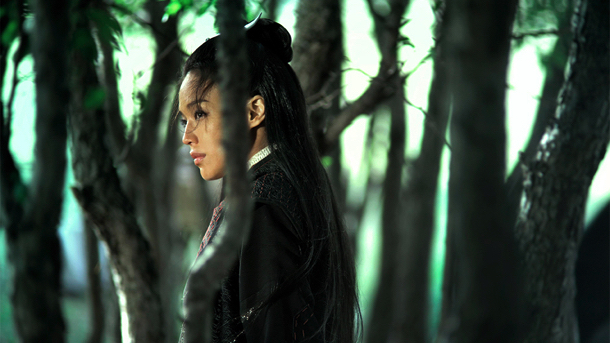 Taiwanese director Hsiao-hsien Hou has brought a Palme d’Or probable to the Croisette with his stunning drama THE ASSASSIN. This is a serious and sumptuously composed masterpiece – in the true sense of the word. Hou brings a sense of uncompromising formal brilliance to the wuxia material. THE ASSASSIN is a work of spiritual resonance and historical importance, it is also visually orgasmic.

Set during the Tang dynasty, the story opens as a young girl played by Shu Qi undergoes training to be an assassin. But her female sympathies stand in the way of her killing instinct and after failing an important mission, she is sent back to her hometown. Some time later, she is again tasked with killing an important governor (played by Chang Chen) who is questioning the Emperor’s authority. The task involves a moral twist: not only is the governor her cousin, but also her first love.

Mark Lee Ping-Bing’s stunning visuals create a sparkling jewel box in every frame. The magnificent landscape showcase lush forests, mist-filled mountains and precipitous gorges in this remote and the often hostile terrain. But this is not the classic martial arts slasher movie and the killing sprees are spare and discrete. This is the domain of the highly disciplined and spiritually-trained Grandmasters, experienced recently through the work of Wang Ka Wai. But Hou’s martial arts sequences have their own brutal and breathtaking beauty and are nonetheless powerful for their distinct lack of gratuitous blood-letting. There is a serene and graceful delicacy to this filmmaking which is both tear-wellingly beautifully and satisfying austere. A sequence involving black magic is particularly sinister, making THE ASSASSIN a captivating masterpiece in elegance and restraint, holding his head proudly in the starry firmament of Taiwanese filmmaking. MT