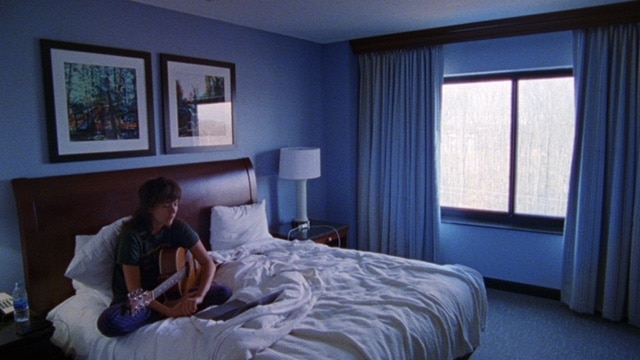 Australian filmmaker Danny Cohen takes full control in this musical biopic about the singer/songwriter and ‘anti-influencer’ Courtney Barnett, who sprung to fame with her witty deadpan lyrics in an album called “I’ve got a friend called Emily Ferris”.

The whole point about Barnett is that she became a sensation not through a glossy image of self-promotion but because of a reclusive style that makes a virtue of her tortured inner conflict and deems her to be a powerful feminist voice for audiences all over the world, and a ‘mega-star in the making’. That may make her sound like a female version of Morrissey, but time will only tell if her talent matches up to the iconic 1980s superstar of the Smiths who is still going strong in his sixties.

Cohen gained access to Barnett through their many music-video collaborations, and paints an intimate picture of the 35-year-old Sydney born singer who is not afraid to admit to deep-seated low-self-image issues and occasional bouts of depression. But somehow Cohen is too overcome by the artist’s persona, and allows the feature to turn into a sort of self-help therapy session.

The film’s title is taken from Barnett’s 2013 song, which we never hear, even though her world tour (without backing band) offers ample opportunity. Starting in 2018, when Cohen told Barnett to use her dictaphone for an ongoing commentary – later used in the feature – the singer had just split up with girlfriend and musician Jen Cloher, who had taken an active part in the creative works. “Tell me, how you really feel” is a proper break-up album, words not being minced: “Tell me when you are getting bored//And I leave//I’m not the one who put the chain around four feet//I am sorry for all my insecurities// But it’s just part of me//”.

The tour takes Barnett on the road to places like Bloomington (Indiana), Oslo and Berlin, but the focus is firmly on the singer herself, and Cohen never lets her escape: “I am not your mother//I am not your bitch” she rages, shouting so loudly during performances, that she loses her voice. Barrnett is often passive-aggressive: “Sometimes I sit and think//and sometimes I just sit”. And: “You know it’s ok to have a bad day”.

When somebody new enters her life, Barnett calms down a bit, but the film’s overriding impression does not compute with the ‘girl next door image’ concocted by the networks and her PR. This would have been fine had the director left his safe spot of chronicler and admirer and posed a few direct questions. Yes, it is absolutely normal to be insecure in the music industry where dog eats dog and the other way round – but  nowadays we are all living on the edge of a precipice in a climate we have helped to create.

Barnett still has a voice – literally and figuratively speaking – but most ordinary people do not. Nobody wants to take the cuddle blanket away from her, millions are clearly waiting to buy her records. But please, save us from long shots with purring cats listening to her guitar songs: this is not a therapy session open to all. In her mid-thirties, Barnett still has the right to feel insecure, but Cohen is obliged to shoot some straight, even awkward, questions. By negligence, he is derailing his project by finishing with another version of “Courtney is just like you and me”. She is not, and the star and her chronicler know that only too well. Therapy might be free, at least in this case – but not much else. AS