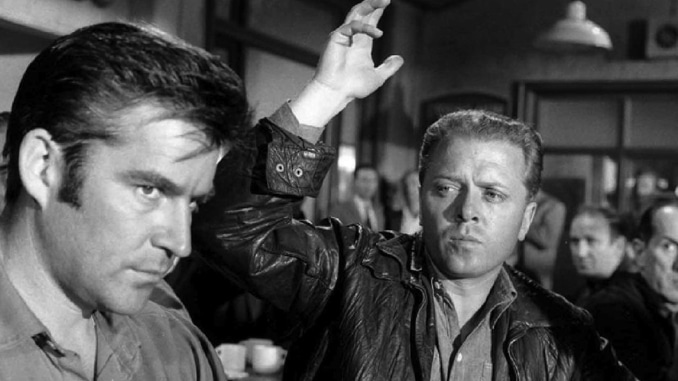 I lived in Ipswich from 1967 to 1976 and actually recognised my old school playground in the only picture that I’m aware of being shot in what Alan Whicker described as “a small industrial town”.

Ten years after British cinema had already grappled with the ‘unsexy’ subject of labour relations during the Attlee years in Chance of a Lifetime (1950), with Macmillan now in Number 10 the issue continued to provoke controversy and debate, when fresh from portraying a shifty boss in I’m All Right Jack – under the direction of Guy Green with whom he’d just made SOS Pacific – Richard Attenborough joined the workforce in Britain’s answer to On the Waterfront which also praised the courage of a strike breaker standing up to threats and intimidation; complete with the final savage beating of the hero.

Italian actress Pier Angeli is deeply touching as Attenborough’s pregnant wife, and the film displays a new rawness in sexual matters. As in I’m All Right Jack the owners are portrayed as stupid, remote and venal, a factor overshadowed as in the former by the unflattering and libellous portrayal of trade unionists needing in UK critic Alexander Walker’s words “only bedsheets and fiery crosses to become a Ku Klux Klan purge”.

Originally titled A Dangerous Game, it was made on a shoestring and took still another ten years to break even; all the time drawing criticism from the likes of Ken Loach for its portrayal of the workers as mouth-breathing teddy boys (Michael Craig grew an enormous pair of sideburns for the film) unwittingly being used as cannon fodder by sinister agitator Alfred Burke (described by Walker as passing “through the strike-hit factory like a bacillus through the human body”). While it’s picture of the popular press (including writer Bryan Forbes helping cut costs by contributing an uncredited bit as a reporter) stirring the pot still resonates today. @RichardChatten