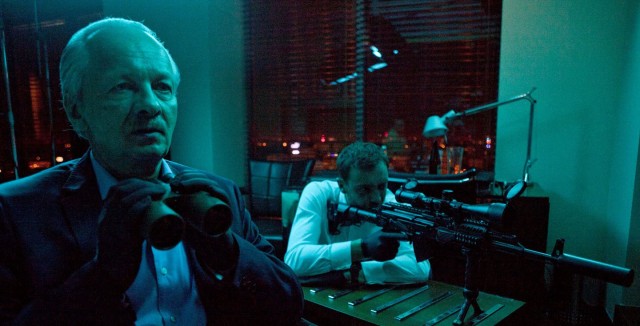 In his latest action thriller, Jacek Bromski (One Way Ticket to the Moon) paints a grim portrait of contemporary Poland. After the fall the of authoritarian Stalinist regime, which wanted to control all aspects of life in the country, Capitalism has brought liberation – but over the years, a new elite has developed – as it did during Communism – and those selected few live a rarified existence simply because of their financial means, connected to a global network of incredible wealth.

Professional killer Karol Lulek (Stroinski), has been released from prison on parole but is asked by his former boss, now the Attorney General, to do the classic ‘one last job’ for the authorities  who put him away in the first place. This involves collecting 100 000 Dollar and a new passport before he kills the Head of the Central investigation Bureau – who has become an obstacle in a multi-million deal involving American money.

Lulek reluctantly agrees but finds out that his sight is since impaired, making it impossible for him to competently undertake the mission. Instead, he finds a surrogate, the young sniper Stasiek (Kowalczyk) hounded down by a local journalist after he mistakenly killed an innocent citizen in Afghanistan. Lulek retrieves his hidden cash from a hut in the countryside, killing the woman who guarded his belongings. He then murders the journalist, hoping to get an emotional hold on Stasiek for his loyalty and trouble. Stasiek meanwhile, falls for a prostitute Halina (Olszanska) who works in a luxury hotel whence he plans to shoots the CBS boss, while he visits his Opera-singing mistress in the adjoining hotel. Naturally, the plan goes awry with disastrous consequences.

Bromski’s contempo Poland is a divided society where community and solidarity have given way to crass materialism, ‘get rich quick’ schemes and deteriorating human relationships. Values have deteriorated and led to indifference in a society ruled by invisible forces and subdued palette steel grey and brown; from the harshly lit scenes in the luxury hotel to the soulless streets where everything seems to be for sale. Lulek and Stasiek are grasping victims and perpetrators at the same time: each man for himself. Krzysztof Stoinski gives an award-winning performance as Stasiek: his naïve love for Halina giving him humanity and purpose. Bromski masterful direction concentrates on the interaction and motives of the characters; avoiding sensationalism. A sober and subtlely-nuanced study of a country fighting for a new identity. AS