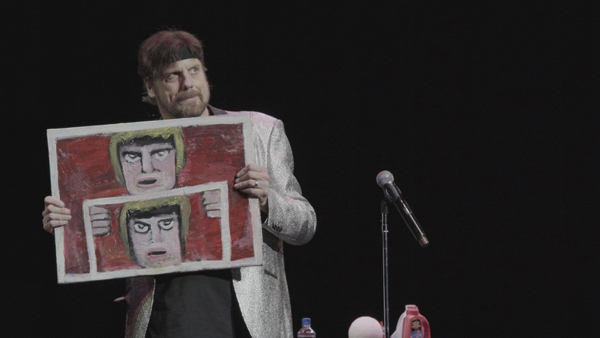 First time documentarian Ben Berman blurs the line between reality and fantasy in this often bizarre bag of tricks that follows the final tour of Magic-comedy star The Amazing Johnathan.

Most of us have never heard of The Amazing Johnathan aka John Edward Szeles (b.1958). But to Americans he is a well-known stand-up comedian whose Las Vegas career spanned nearly thirteen years. So it really deserved better than this half-baked treatment showing that Berman didn’t really do his homework before embarking on the endeavour. Nevertheless it raises the odd chuckle and gasp along the way.

A committed cocaine-user, Johnathan’s schtick was the standard stuff that went down well with a mainstream crowd of adults and kids alike: he would pretend to saw off arms and legs; or indulge in card tricks. He was then diagnosed with a heart complaint and that he only had a year left to live. As it happens, it’s only a chronic condition known as cardiomyopathy. And the film begins in the third year of his survival, when he and his wife Anastasia Synn are enjoying a relaxed retirement, so much so that Szeles decides to stage a come-back in the shape of a “farewell tour”.

As his profession would suggest, Szeles is a bit of a maverick whose quirkiness puts a surprise spanner in the works of Berman’s filming schedule which goes decidedly pear-shaped, questioning his ability to go forward given the increasingly bizarre behaviour of his subject, and also reflecting back on his own lack of experience and naivety when dealing with the ambiguities of the human condition – but also of commercial life.

Berman relies on talking head interviews (Eric Andre, Judy Gold, “Weird Al” Yankovic) who sing the praises of the magic man. He also wheels in some of his own family and friends to bolster his own credibility. What emerges is rather silly at best but also holds a certain value entertainment wise in this bonkers but bookable biopic. MT

Louis Theroux will host a special Q&A screening of the film on 19 November, to be simulcast nationwide across the UK. https://www.tajdfilm.co.uk/

ON RELEASE NATIONWIDE FROM 19 NOVEMBER 2019