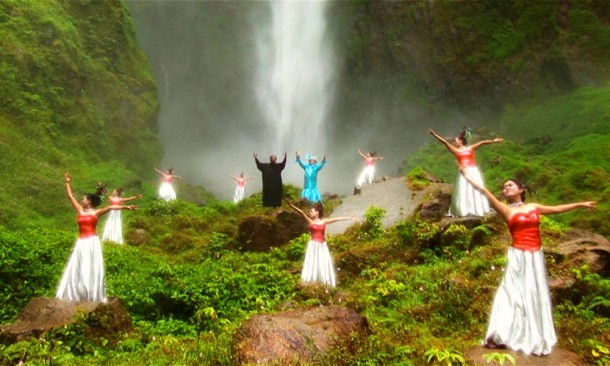 Joshua Oppenheimer is gentle and unassuming as he presents the uncut version of his bold and provocative documentary, on stage at the Open City Docs Fest in London.  It brings to light one of the most cruel episodes of state-sponsored genocide that took place in Indonesia in 1965 following an abortive coup, presenting the narrative as a recreation of the killings from the viewpoint of the killers, in a subversion of Augusto Boal’s ‘theatre of the oppressor’.

Garish in both style and content with its rich reds, earthy browns and vibrantly incandescent Sumatran setting, the film focuses on these perpetrators of violence like a chamber of tropical horrors.  These ‘gangsters’ are former death-squad bosses who ‘re-enact’ their crimes before our eyes, in the vain hope that they may regret their actions during a cathartic process.  Clever idea but does it actually succeed?  In a process that took seven years from start to finish, Oppenheimer began by interviewing victims of the massacre.  Not surprisingly, many did not want to revisit the horrors of the past so he turns his camera on those responsible befriending them and getting them on board for a gore-fest in which nobody actually gets killed.

The murderers emerge as vain and ego-driven men who are buoyed up by their reputations as tough guys, still feared in the local community and enjoying continued government protection.  Anwar Congo, a particularly unpleasant piece of work, has no qualms about the past and still thinks himself attractive to the opposite sex, having his teeth whitened in a beauty parlour before demonstrating his garotting techniques. Blithely, he recounts how he perfected them to avoid having to deal with all the bloodshed caused by the ‘machete method’.  In a bizarre twist, he also attempts to garner sympathy with a tearful episode on returning to the scene of the crimes. Sensibly Oppenheimer plays this down.

The Act of Killing is not an easy film to watch or to listen to not least because of its subject matter.  Indonesian is a highly fricative and percussive language and the English subtitles, often set on a pale background, are often difficult to read.  At over two hours, the middle section rambles and becomes laboriously repetitive and without a clear editorial voice or clearer historical context, it’s easy to disconnect.  That said, it’s still a mind-blowing piece of filmmaking that revisits a regrettable period of Cold War history.  However, there’s no real closure here apart from mild regret from Anwar Congo, who is still at liberty, and one wonders whether the whole chapter would have been better left in the dark. MT

THE ACT OF KILLING is NOW ON DVD/BLU