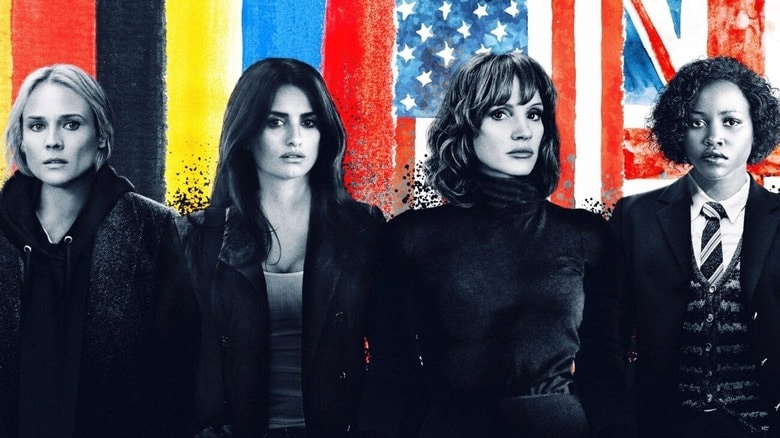 British-born director Simon Kinberg, producer of the X-Men series, teams up with Jessica Chastain to co-produce this female super-spy caper, co-written by Theresa Rebeck and Bek Smith. Chastain asked Kinberg for a female super-hero feature, having been part of the star studded cast of X-Men: Dark Phoenix, a loss making 200M+ dollar project which he also directed, wrote and produced.

It all starts with a stock slaughter sequence in South America, where drug lords are fighting for an electronic device that gives its owner control over all electronic traffic worldwide. Next, said device turns up on Paris, with major intelligence agencies chasing the hardware destined to be sold in a mass auction on the Dark Net.

Mason ‘Mace’ Browne (Chastain) and Nick Fowler (Stan) represent the CIA as a couple with ‘special benefits’. Marie Schmidt (Krüger) of The Bundes Nachrichten Dienst (BND), (the German State Security organisation) is still reeling from the shock of her father’s role in the KGB. But Graciela (Cruz), a Columbian DNI agent and psychologist, is the odd-one out: roped in by her fellow countryman Rojas (Ramirez)mwho is dying after the unsuccessful attack on the drug dealer.

Rojas is not the only casualty: Fowler also comes a cropper, driving Browne even harder to get her paws on the device. Alas, her ex-partner is very much alive – and on the wrong side, making Mace’s retrieving action into a revenge story.

Structured along the lines of a Bourne feature, The 355 (named after the first US female spy operating under George Washington’s command), not only suffers from a convoluted script, but also outstays its dubious welcome, bloodied by needless fighting scenes: all decisions are actually taken by Khadijah, based on her superior technological knowledge. The agents on the ground are reduced to mere ‘action-women’ figures – not exactly “The Female Rainbow coalition” Chastain had in mind.

DoP Tim Maurice-Jones really does a great job on the look of The 355, but the vaunted female heroines are merely inferior James Bond replacements and we don’t care what happens to them, or indeed the upcoming Chastain/Kinberg collaboration entitled  Wayland, another high-budget production destined for a loss. AS