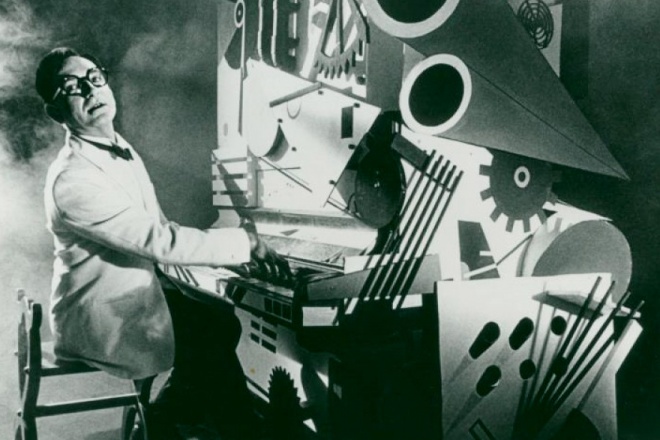 British director Tony Palmer (Bird on a Wire) has an impressive track record, mostly connected to music, and particularly composers. His portrait of Dmitri Shostakovich (1906-1975) is easily his masterpiece. Although Palmer is criticised for basing his biopic on the controversial Solomon Volkov, the aesthetic brilliance of the feature, and an imaginative script by David Rudkin produce a feast for ears and eyes. This tour de force is crowned with Ben Kingsley as a brilliant Shostakovich, DoP Nic Knowland (The Duke of Burgundy) producing grainy black and white images, which are often not discernible from the archive footage of the 1940s, ’50s and ’60s, or the quotes from early Eisenstein films.

Palmer presents his film as a metaphorical duel between Shostakovich and Stalin (Rigby). Even though, in reality the two never met, and only spoke once to each other on the ‘phone, Stalin is a constant presence in the composer’s life. Married to the independent Nina (Baines), with two children, Gala and Maxim (Magdalen and Mark Asquith), Shostakovich had a rather turbulent family life. But the ordinary quarrels were forgotten at night, when the pair cuddled up in bed, listening to noises on the staircase, generally signalling some confrontation between neighbours and the Secreti Police.

The composer slept with a packed suitcase (warm clothing and toothbrush) under his bed for decades. Shostakovich’s name was on Stalin’s ever growing growing list of enemies (as was Rachmaninoff), the dictator had noted the composer’s opera Lady Macbeth of the Mtsensk District in 1936. Stalin and his entourage had left the theatre in anger, and Shostakovich had to withdraw his Forth Symphony, simply to stay alive. He took to composing music for the cinema, and we watch him in the cutting room, discussing the score with the director. It should be said, that both Stalin and Shostakovich have much more of a physical presence than a verbal one. The composer seems often resigned, biting his tongue, whilst Stalin is never happier that when he is going though the list of artists who he can eliminate with a stroke of his pen. Shostakovich’s Fifth Symphony, actually called an apology of a Soviet composer for earlier mistakes, brought him back into favour. His greatest triumph was the war time composition of the 7. Symphony, the Leningrad, which got him on the cover of Time. But all this was forgotten when he (and other composers such as Prokofiev and Kachaturian) were accused by Polit-Bureau member Zhadanov (Shrapnel) at the Congress of Soviet Composers in 1948, to have written music that indulged in Formalism, avoiding any positive messages for the proletariat. But a year later, Stalin telephoned Shostakovich asking him to attend the International Peace Conference in New York. There the question of Formalism was raised again, and Shostakovich accused himself and other composers – Stravinsky was one – of the error of making music for the sake of the form. Stalin died in 1953, and Palmer added a dream sequence in which the dead Stalin visits the dying composer, who tells him: “Looking back, I see nothing but ruins, but mountains of corpses.”

There are unforgettable images: Stalin’s huge stone head rolling toward the composer, threatening to crush him. And then there is the scene with the composer on a raft, playing the piano, sinking deeper and deeper into the water, with Lenin’s sculpted head on fire. Most of the music is played by the London Philharmonic Orchestra under the baton of Rudolf Barshai – with all the music pieces shot in colour.

Testimony was not really a critical success at its opening but has matured into a classic, Palmer triumphing, but never again reaching the heady heights of perfection with this idiosyncratic, extravagant, essayist reflection on art and politics. AS