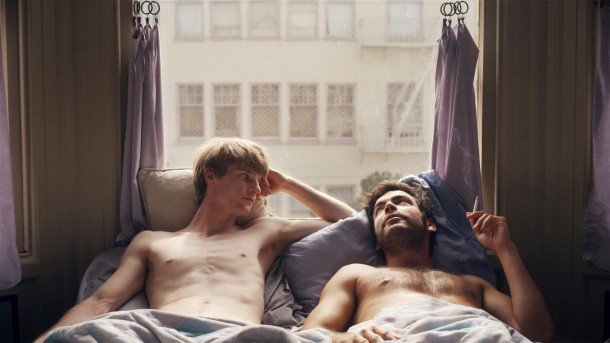 San Francisco 1985: Frankie, a dancer in his early twenties, young and insecure on all levels, is caught up in the Aids trauma. Where ever he goes, he can’t escape the epidemic: graffiti on walls denounces the gay community, people are openly discussing the placing of gays into quarantine and Rock Hudson’s death makes the front cover of ‘Times’.

His dark, brooding friend and co-dancer, Todd, makes fun of it all – and also of Frankie, who is also told by the ballet master (C.M. Johnson) “to dance like a fucking man”.  When an Aids test is offered, Frankie takes the plunge: two weeks of nerve racking fear follows, particular since one of his casual sex partners, Walt, phones him to tell him that his test was positive.

TEST is a study in paranoia. Frankie is caught like a rabbit in the headlights of a car: everything frightens him, even the use of condoms is an enigma: joking can’t hide the fact that he is not convinced of their usefulness. And even the rehearsals of the ballet group are not safe any more: Molly (Catherine Wells) challenges Todd to clean himself of his sweat since she is afraid that Aids can be transmitted through pores. Frankie fights for emancipation on all levels: as a dancer, as a homosexual and a man.

Frankie is looking more like a sad little boy than an adult, lost on all levels: he is only an understudy in the dance company, waiting seemingly forever for take advantage of the unavailability of a fellow dancer. His friends are both older and much more mature; not to mention their assured masculinity – however much of a put-on this may be. The two weeks between test and result seem to push him over the edge, he hallucinates a “positive” result and his landlord is giving him notice. Permanently searching his body for signs of sarcomas, Frankie flees into the world of music, his new Walkman helps him to escape into another world echoed in eighties vibes: Lawrie Anderson, The Cocteau Twins, Romeo Void and, significantly “Small Town Boy” by Bronski Beat.

TEST’s style is very much eighties: we see a great deal of San Francisco in panoramic shots. The music dominates and Frankie is allowed a naivety, which is both charming and irritating. The dance rehearsals are also a reminder of “The Living Theatre”. Colours are appropriately all primary: transmitting an innocence of which Frankie is the standard bearer. Sometimes Johnson overdoes it: the fluffy clouds are really not necessary. Mostly filmed indoors or on quiet streets, TEST feels like a picture from a ghetto: the living dead in their dream world, with Frankie as an Alice whose understanding of reality is tested permanently. AS