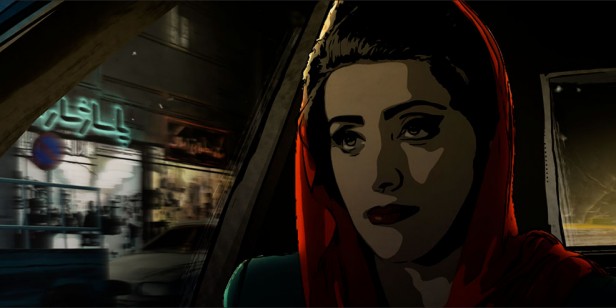 First time director Ali Soozandeh shows us the seedy tightly-belted underbelly of life in Tehran, where drugs, illegal sex and all sorts of corruption are still part of a daily routine. Using rotoscoped characters and a mixture of 3D and drawn backgrounds, he creates a vibrant picture of a place full of psychotic men and women punished for their hypocrisy.

Pari is trying in vain to get Elias enrolled at a special needs school. But her attempts are unsuccessful, because her husband is serving a long jail sentence for drug-dealing (“I gave them 20 million to avoid the death penalty, now they want ten million for my freedom”), he refuses to sign the application form and will not allow Pari a divorce. When she asks the clerical Judge Adel to help her, he denies her rights – but finds a nice flat for her where he can visit at his leisure, loving the rough sex she provides. In the apartment block Pari where poses as a nurse, we meet Sara (Ebrahimi), who’d rather work as a teacher than have children with her repressive husband Mohsen. Sara looks after Elias, while Pari uses Judge Abdel to get her son into a school. A third narrative strand involves Donya (Alizadeh), who has a one-night stand with musician/DJ Babak (Marandi) and needs an operation to have her hymen replaced for her marriage the following week. When Pari tries to help both Sara and Donya, she discovers that both women have secrets that will lead to their undoing.

Soozandeh makes great use of mirrors and other reflective backgrounds to show the reality, hiding behind the action in front. A typical example of male society is Sara’s father-in-law, a diabetic, who uses Elias to fetch the hidden chocolate from the shelves. He watches pornographic films in Elias’ presence – but is alert enough to quickly switch the TV channels to the state-controlled news as soon as Sara comes into the room. Although the narrative is sometimes too heavy-handed, Soozandeh succeeds in painting a picture of male debauchery and violence behind the curtain of religious purity. MT

ON GENERAL RELEASE FROM 6 OCTOBER 2018