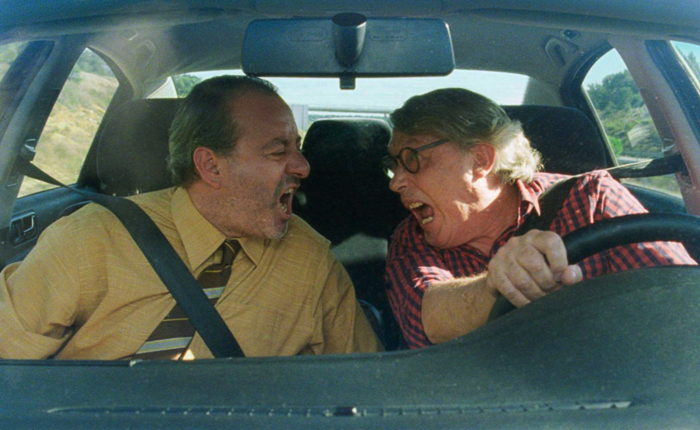 Joao Nicolau’s musical bittersweet tragedy could be described as the sentimental swan song of a technophobe – quite literally. It witnesses the slow death of a salesman, but this Willy Loman is defiantly not going to give up without a struggle. Luis Rovisco (Lobo Antunes) is an endearing old buffer who is nearing retirement after dedicating his life to one company. His marriage is over so a paperback book keeps him company on lonely nights on the road, when he’s not bursting into impromptu bouts of song at every opportunity.

Naturally, he suffers the usual aches and pains of late middle age. And rather like Victor Meldrew he finds technology challenging to say the least: bank codes and car-parking barriers often get the better of him. But he’s no fool when it comes to dealing with old-fashioned paperwork and his verbal dexterity and negotiating skills serve him well and could run rings around many a digital native when it comes to servicing his clients.

Newcomer Miguel Lobo Antunes throws himself into the role with gusto and is totally unselfconscious in this inventive musical hybrid – which takes a bit of getting used to, and may not appeal to everyone with its slightly 1970s look. Although the film is overlong, Nicolau’s characterisation keeps us engaged because Luis feels like a real person – he may even be someone you know. His natural joie de vivre and charisma is infectious as the story wears on, Luis embodying the ideal salesman with his positive manner. And when he meets up again with a previous flame in the shape of a rather reluctant Lucinda (Luisa Cruz), who works in one of his regular haunts romance may even be on the cards again: If he can close any sale, let’s hope it’s this one. MT