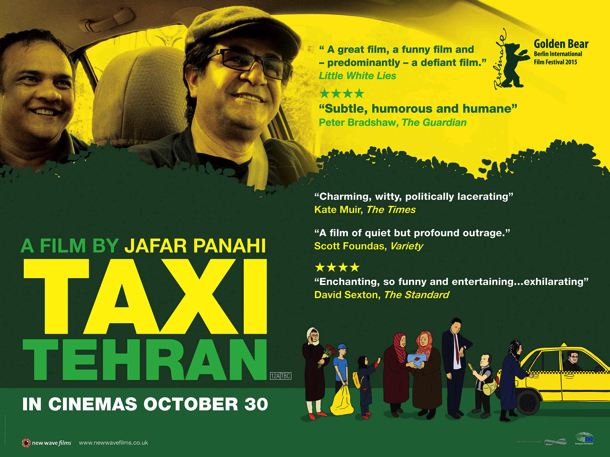 The third film to be released by Iranian director Jafar Panahi, since being placed under house arrest, plays out like a living, breathing video essay on the director and his work. But it also manages to capture so much about Iranian filmmaking, and cinema as a whole. Panahi takes us on a dense, multi-layered cab ride through the streets of the capitol; a thought provoking journey, packed with warmth and humor, and dotted with the sort of fleeting moments- some chance, some not; that make Iranian film so sublime.

Filmed entirely from small portable cameras in a Tehran taxicab, Panahi plays it all quasi-documentary as an undercover cab driver. On his 90-minute spin around the city’s streets, the director picks up a motley crew of passengers, many of whom offer little winks to the director’s past work.

The first argument about justice, we’re told, is taken from CRIMSON GOLD. Then there’s a blood covered man who must be rushed to hospital; a man with a bag of counterfeit DVDs; two old ladies in a rush with some goldfish; and the director’s niece trying to make a “distributable” film herself. The soft-spoken Panahi just sits and takes their confessions.

Through these conversations, the film throws up a number of questions about the role of the filmmaker, and whether or not it is right to follow any sort of moral code. When his niece enters the cab she recites the cultural ministry’s statute of what makes a film “distributable”. Then, just moments later, the girl attempts to direct the events of a little street-side drama so that her film will follow the code. The next passenger in the cab is a lawyer who has defended cultural dissidents, and Panahi has her show up with a giant bouquet of roses. It’s clear where his allegiances lie.

With Abbas Kiarostami and Mohsen Makhmalbaf, now both living in exile, the director is one of the last remaining lights of that old guard to stay home. And TAXI has retained many of the fine elements that made those directors’ New Wave films so great. The idea of automobiles as a center for conversation; the lightning in a bottle effect of filming children who seem oblivious to the lens; and the belief in cinema as a transcendental medium and one which can connect us, no matter how varied our situations are.

By putting himself in front of the camera, as well as behind it, is the film a touch too narcissistic? Perhaps. That said, Mr. Panahi has been collecting major plaudits since his house arrest took effect, and TAXI might just be the best of the lot. Rory O’Connor