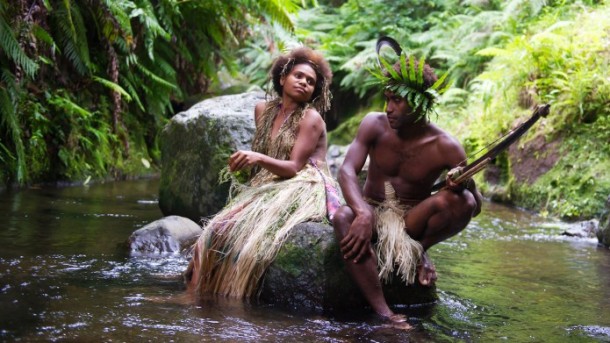 Dean and Butler are experienced TV documentarians whose first foray into narrative features is this stunningly cinematic tribal tale from Vanuatu in the South Pacific.

TANNA is a tragic love story whose implications ripple out into the wider world and connect us to the narrative of disappearing communities and survival of remote tribes. There is a disarming innocence and fierceness that marks the traditional tribal villagers out as philosophical and emotionally highly evolved, despite their frugal and backwood existence in the magical island set in its Pacific splendour. The Australian helmers make no attempt to trivialise these honest and gentle people, or diminish the very real threats they face from rival tribes who pose a very real danger if their customs and beliefs are not upheld. By incorporating elements of ethnography and spirituality in their storyline TANNA comes across as a serious study while cleverly also appealing to mainstream and arthouse audiences, children and adults setting the story from the young protogonist’s perspective.

The island of Vanuatu has around 30,000 inhabitants who form part of distinct tribes who embrace the Kastom system of beliefs, rejecting Colonial invasion, Christianity and the lure of 21st century economic advancement. Dean and Bentley lived amongst the islanders in a village called Yakel where they gradually put together a narrative based on tribal customs, rituals and traditional stories basing their drama on an incident that occurred during 1987.

Women play an important role in this patriarchal community and the story is seen through the eyes of a little girl called Selin who quietly observes a budding romance between her sister, Wawa and a the village chief’s orphaned grandson Dain, But Wawa is coming of age and been committed by her grandfather to an arranged marriage with a man from another tribe which will serve to heal a rift between the rival villagers. Both the sisters share a rebellious streak and Wawa has no intention of fallong in with the arranged marriage haven fallen in love with Dain. Selin’s grandfather is the village shaman, and he takes her to visit the island’s active volcano, Yahul. The vermillion sparks and fiery energy provides the focus for a spritual force that offers both comfort but commands supreme respect.

TANNA is a poetic and magical drama that also highlights the songs and music of the tribal traditions focusing on the virtues of conflict resolution, forgiveness and wisdom gained through experience. The film shows how the rival tribes are proud but deeply philosophical and always willing to ‘see another way’ in resolving their differences, and although they appear backward are highly evolved, bringing compassion and intelligent to their way they conducting inter-tribal relations.

With its tantalising score and natural performances from the villagers, Bentley and Dean have created a tense and tender drama that is instructive and dazzlingly cinematic harnessing the rain forests, colourful tribal costumes, volcanic landscapes and palm-fringed beaches of Vanuatu. MT

ON RELEASE AT SELECTED ARTHOUSE CINEMAS FROM 17 FEBRUARY 2017