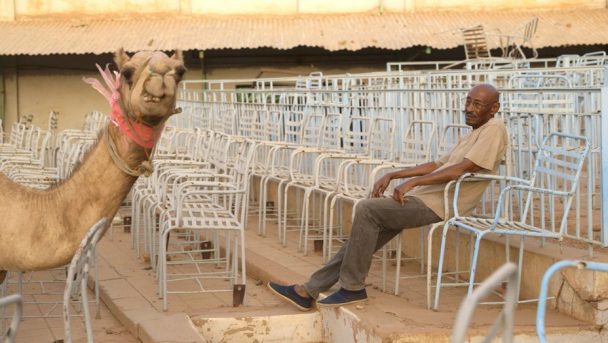 Director Suhaib Gasmelbari scripts and photographs this sorrowful love letter to the demise of Sudanese cinema that explores the efforts of a group of retired directors hoping to revive their country’s love of film.

Talking About Trees is also about the impactful and collective experience of watching films in the cinema, sharing the buzz of humour or sadness, and the cultural exchanges that come through the medium of sight and sound on the silver screen.

The Sudanese Film Club consists of a group of directors: Ibrahim Shadad, Manar Al Hilo, Suleiman Mohamed Ibrahim and Altayeb Mahdi, who have been forced into retirement against their own volition. Efforts to reopen a cinema in their city of Omdourman, near of Khartoum, have been unsuccessful to date. The country’s dominating Islamist regime and its restrictions has put paid to any enjoyment film-wise taking place in the public domain.

These filmmakers were trained outside the country and they share clips of their impressive oeuvres throughout the documentary. Clearly influenced by French New Wave and Soviet montage, their visual language is muted and reflective of political regimes that conflict with the current status quo in Sudan. After a military coup in 1989, the government fell under the control of Islamic fundamentalists, and Sharia law has prevailed since the early 1990s.  Khartoum still has a few theatres showing mainstream fare, but indie features are banned.

Shadad and his friends host free screenings in their town squares, and these are massively popular and stimulate interest with young and old alike. But red tape soon strangles their efforts, even before the finances run out. The country’s culture becomes moribund before our eyes: it’s akin to seeing someone losing their life right in front of you as you look on powerless to intervene.  “We are smarter, but they are stronger,” is the comment one of them makes. But they persevere, upbeat and full of hope tinged with remorse. A tragic and deeply moving experience. Let’s hope Martin Scorsese comes to the rescue, as he has done before. The film ends with a salient takeaway that says it all. “Seeing a movie with friends is better than watching one alone at home.” MT