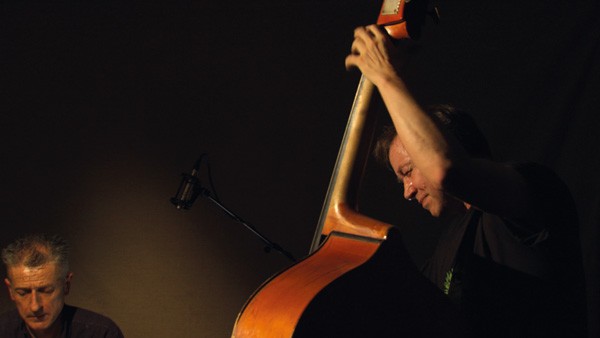 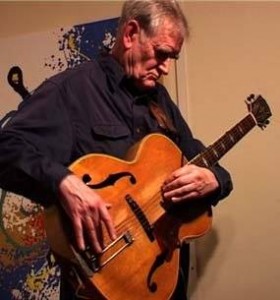 They play their instruments tunelessly on purpose, don’t use a written score, improvise at length with a-tonal singing accompanied by anything that comes to hand even balloons!. “They” are the musicians of the ‘British Free Improvisation Movement’ and their audiences, sitting alone in bedsits; are small, sometimes only numbering three – plus a dog, as the inside joke goes. And how do they make their audience happy? Easy: Taking the dog for a walk!

This documentary about the British Free Improvisation Movement, is also the life story of the avant-garde guitarist Derek Bailey (1930-2005), the founder of the movement, still revered as a leading figure, role model and innovator. Set mostly around Hackney, Stewart Lee interviews the musicians whilst the camera follows  their performances in clubs and pubs. Bailey first played Free Improvisation music in his flat in Glasgow in 1953, but only came to prominence, after he moved to London in 1966, performing in the “Little Theatre Club” with Evan Parker (Saxophone), Kenny Wheeler (trumpet) and the double bass player Dave Holland; the group calling themselves “Spontaneous Music Ensemble”. In 1970 Bailey founded the record label “Incus” and also co-founded “Musics” Magazine five years later. For over thirty years he was the spiritual leader of the movement, (playing in such diverse places like the ‘Wigmore Hall’ or with Morecambe & Wise in a BBC studio) before his death from Motor Neurone disease at the age of 74.

The music “should represent everything they are” and whilst there is banter, jokes are frowned upon even though landlords often don’t re-book them due to their lack of humour. Sometimes a group takes a holiday at the beach in Brighton where they argue about their provocative costumes but never forget that only ad-hoc music is true to their spirit – like cleaning their instruments (or their throats), Even though public comments like “must be nice to be paid to clear your throats” might hurt.

Bailey and the musicians of the older generation are mainly influenced by ‘Free Jazz’ whilst the younger ones take their inspiration from the Post-Punk scene. They compose on the spot, but are “every night a new person”; constantly inventing new objects to turn into musical instrument. They don’t even mind their babies listening. Few of them can make a living, but the majority is just happy just making music. Proud of their movement, the camera shows the tremendous personal sacrifices they make in the name of the movement: living the life of permanent students, some even existing without social security. But this is a human story where we care more for the musicians than their music, (rather painful to witness at times). Prum shows a lively, anarchic, but nevertheless constructive and creative scene, where passions run high and Bailey’s memory is kept religiously alive. AS