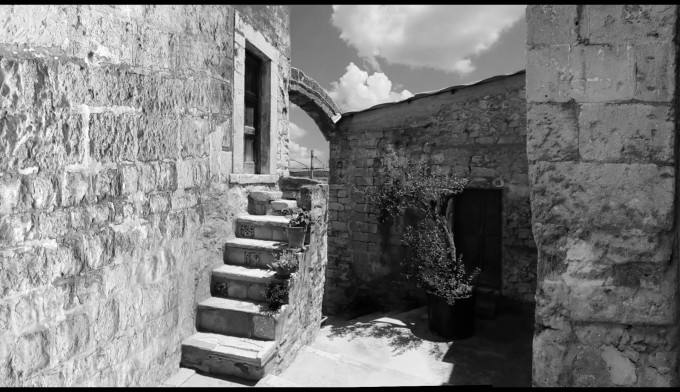 Abbas Kiarostami was born in Tehran to a professional artist father who influenced his decision to study design. After winning a painting competition, he went to study graphic design, working as a commercial artist, graphic designer, illustrator and eventually shooting adverts the 1960s.

This artistic training informs his filmmaking and is noticeable here in a 16 minute short entitled TAKE ME HOME. The film is really all about symmetry and gracefully illustrates Kiarostami’s natural ability and visual flair in understanding shape, form and architectural perspective.

TAKE ME HOME is engaging as a film and satisfying as a multimedia piece of art. In Southern Italy, a little boy drops his football at the top of a narrow stone stairway outside his home, As the ball bounces downwards, our eyes are drawn along with it, in an endless rhythm from side to side, as it travels to the bottom. Each perfectly framed tableau could stand as an individual piece of artwork. Put simply, the film shows the balance of lines and perspective, the chiaroscuro shadows that move and constantly change from dark to light in the black and white minimalism of shades of graphite grey and chalky white as the football cascades inexorably connecting each frame to the next in a mesmerising sprial study that draws us in, until a little boy retrieves it and goes back home. Adel Yaraghi’s perfect editing and Peter Soleimanipour’s upbeat original score give this a hopeful and positive feel. From a more complex perspective TAKE ME HOME is a metaphor for life’s diurnal rhythms soothing us reassuringly in the knowledge that whatever happens,  and despite the endless chaos of the day, all will be well in the end. MT