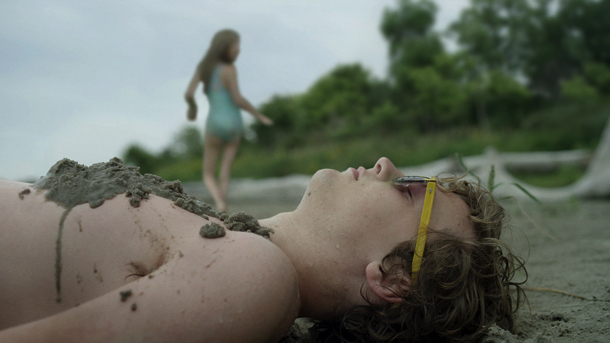 There is something tenderly piquant about Matt Sobel’s indie debut that makes spectacular use of its woozy bucolic landscapes and riverbeds of a summery Nebraska.

Suspicion sizzles in the ripening cornfields and there’s more than a whiff off tension is this teasingly told Mid-Western Gothic saga that holds its secret close to its chest as a brooding sense of panic sears through this Red-Neck heartland. The homespun tale opens as a family trio of Cindy Robin Weigert), her husband (Richard Schiff) and laidback teenage son Ryder (Logan Miller) are driving from California to ‘Grammas farm’ to spend afew pivotal days with her brother Keith and the Nebraskan side of the family. Her brother’s family is a conservative one, with guns in their pockets rather than mobile phones, and an unfortunate incident that occurs shortly after their arrival sets a tone of mistrust and animosity in the days that follow.

When Ryder meets his young cousin Molly, it’s clear that she is a handful used to getting her way with men, clearly honed by being the eldest daughter of four girls. Ryder, gamely rocking red minishorts and a deeply sccoped neckline, is hoping to announce his coming-out but mother Cindy advises him to keep things low-key with her rather more conservative Nebraska family. But Molly pushes the boundaries out until an accident in the haybarn causes the menfolk, and particularly Keith,  to come down heavily on Ryder, blaming him what has happened. Although Ryder is scandalised, he retreats into the safety of a ramshakle outhouse, rejecting his mother’s efforts to pour balm on troubles waters all round.

Josh Hamilton gives a button-up yet mesmerising turn as Keith: masterful and masculine but totally eschewing the macho swagger normally associated with the mid West. As Ryder, Logan Miller is subtly sophisticated and superbly sullen but newcomer Ursula Parker, as nine-year-old Molly, achieves an portrait of cocquettish charm and knowing seductiveness that is remarkable for one so young. Robin Weigert’s Cindy is the only one poorly-written: instead of being the confident, educated woman who left the county to study in UCLA, she appears ingratiating and no stronger than Keith’s submissive wife Ruth (Azura Skye), particularly when all her issues from the past with Keith, threaten to re-surface.

Sobel’s storytelling deftly embraces burgeoning teenage sexuality to remarkable effect, from the permissiveness of the West Coast to the entrenched and traditional values of the South West. But despite Thomas Scott Stanton’s sumptuous visual evocation, the story never quite serves or satisfies its suberb setting; teetering forever on the edge of enigma with too many implausibilities, leaving us high and dry like a floundering fish on the bank of the North Platte River. MT