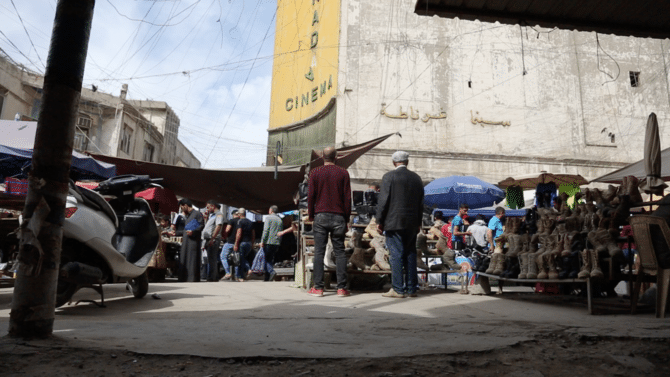 “You have dreams, but it’s important to fulfil them too”

The cinema has long provided an escape route, a journey into a dreamworld when reality is too much to bear, or freedom impossible. But does cinema have a future in the modern world ponders Iraqi filmmaker Albaqer Jafeer.

Four years in the making his documentary Take Me to The Cinema was inspired by Nassif Falak’s and serves both as a personal odyssey into the world of film and a potted history of a troubled era told through his protagonist, an Iraqi soldier who avoided active service in the 1980s Iran/Iraq disappearing into the world of film where his obsession with the film Papillon began.

The soldier reflects on a time only 50 years ago when travel was impossible, so the only way of escape was to flee into the darkness of a cinema. Papillon remained seared to his memory conjuring up images of conflict and confinement far worse than those experienced by Steve McQueen. Iraq went into lockdown when war was declared in 1981, so the soldier decided to forge a passport as a means of escape – he also forged passports for his friends.

Captured in magical images of the ancient riverside city and its splendid surrounds, the lyrical journey begins with the two traipsing round Baghdad in the purple gloaming during the evening prayer time. Intercut with reminiscences of the conflict, the 65-year-old former soldier and Jafeer browse through old combat gear, which now has a valuable market value of its own. A walk through a disused cinema is revealing – and it was where here the soldier last saw Papillon on the big screen. Italian movie posters of matinee idols still adorn the crumbling walls, old reels of film are strewn about the sandy aisles in a sight for sore eyes. But there’s also treasure amongst the wreckage. “Cinema is like an Iraqi person – he opines – it went through the sanctions and survived”.

The final act comes full circle as the soldier acts out his ‘dream’ in the reality of the nearby countryside, striding symbolically through the wasteland, tossing away his combats triumphantly and embracing the future and all it holds declaring “I am here you bastards” a quote from McQueen’s Papillon in the film. Take me to the Cinema is another slim but enchanting film from the Arab world playing at this year’s Red Sea Film Festival. MT