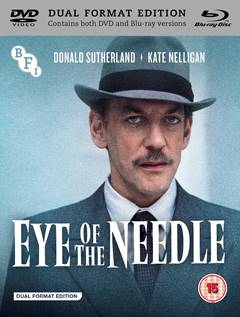 EYE OF THE NEEDLE is an ambitious wartime spy thriller set on the Isle of Mull and based on Ken Follett’s novel adapted for the screen by Stanley Mann. It was one of several big screen outings made by the British TV director Richard Marquand along with Jagged Edge and Return of the Jedi.

Evergreen themes of passion vs marital allegiance are bought sharply into focus when a stranger arrives on the remote Scottish Island en route to Germany with secrets that will stop the D-Day Invasion. Donald Sutherland’s ruthless spy is the outsider who inveigles himself into the household of Lucy (Kate Nelligan) and her ex-RAF husband David (Christopher Cazenove) who is wheelchair bound after a car accident pictured in the early scenes in an idyllic English countryside. But can illicit passion survive the harsh realities of war? This is a gripping and energetic affair, with appealing performances from Cazenove and Nelligan as the conflicted couple, but somehow Donald Sutherland never feels attractive enough to appeal to this lonely woman, and despite his best efforts to bring charisma to the role, he just remains a weirdly unlikeable psychopath.

After a brief prelude in the summer of 1940, Sutherland’s unsavoury German spy called Faber -”Needle” is his codename – finds out that the Allied invasion of Europe will take place in Normandy. But while he’s about to relay this information to his superiors he is shipwrecked on Storm Island (Mull) and rescued by Lucy and David, who is threatened by his steely presence in their family home.  Meanwhile, Faber goes straight for the jugular when he realises that the couple’s marriage is in trouble largely due to David’s feelings of inadequacy, and it’s not longer before he has cast a spell over Lucy with a combination of his powerful persona and bedroom skills. Their passionate affair then becomes the central focus, the spy story taking a back seat with its rather inevitable and unsurprising showdown as Lucy comes to her senses – and there’s nothing like a drab morning in Scotland for staging a wake-up call.

But it’s Kate Nelligan who you’ll remember, nearly three decades after the film’s initial release. It’s a shame her feature film career never really went further than TV work because she brings a remarkable tenderness to her role as Lucy. As war romance thrillers go, Richard Marquand certainly made an impressionable one. MT

OUT ON DUAL FORMAT FROMT 24 SEPTEMBER 2018 | BFI releases are available from all good home entertainment retailers or by mail order from the BFI Shop Tel: 020 7815 1350 or online at www.bfi.org.uk/shop

Best known for Divergent and The Time Traveler’s Wife, Robert Schwentke’s first German-language feature for 15 years is a shocking depiction of the dark recesses of the human mind when left to its own devices after emotional trauma has robbed it of all decency.

This gruellingly uncomfortable watch is told through the real-life story of a young German soldier who deserts his unit during the last knockings of the Second World War when he assume the rights but not the responsibilities of of a high-ranking official whose guise he assumes after a chance discovery.

We meet Willi Herold (Hubacker) trudging laboriously through a widescreen rolling landscape in search of something to eat. Mud-splattered and worn down after hiding in the roots of a tree after his chase through the forrest that is straight out of Jan Nemec’s Diamonds of the Night. Herold is now desperately looking for something to eat. What he finds is a suitcase containing the pristine uniform of a Nazi captain. Confidently assuming this new guise complete with monocle, Herold goes on to command a motley crew of survivors on an odyssey into the nadir of destruction and debauchery.

Far from Noirish this startlingly lit arthouse shocker takes time in establishing its horrific storyline as Private Herold transforms into an emotionally detached psychopathic killer. A hauntingly spare score, jagged angles and claustrophobic interiors echo German Expressionism at its finest as the camera leers down on Gothic townscapes and cowers up at the frightening faces of these demonic deserters at the crumbling of the Third Reich.

A dynamic cast of Germany actors are led by the diminutive Max Hubacher channelling Bob Hoskins in Long Good Friday with touches of Daniel Craig. After subjugation, he discovers domination. And he likes it. Barking orders at his subordinates and giving his hostages the full two barrels, the tension gradually mounts as he convinces everyone he’s taking order from the Führer himself. Milan Peschel plays his adjutant, calmly obeying him but secretly despising him. There’s a madcap quality at play here, although realism dominates in the dialogue and acting.

The Captain must surely be the definitive anti-war film with its over-arching themes of futility and gratuitous violence and the final scenes shows British complicity in the act of war, but not a drop of blood is ever shed. Chillingly devoid of genuine camaraderie save that of the togetherness of joint slaughter this is an exquisitely stylish, gratuitously violent, quintessentially German absurdist parody with its homage to The Night Porter in the deranged denouement. MT