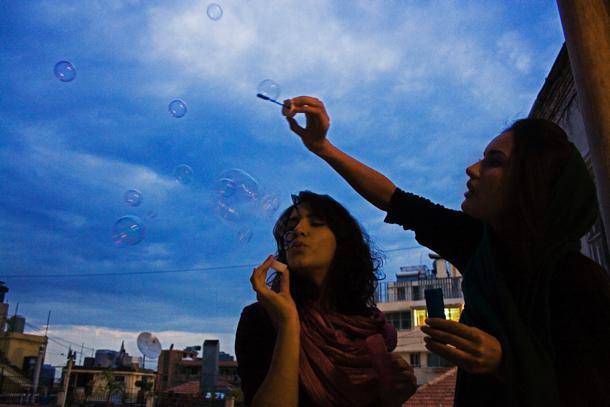 Politics and sapphic desire go hand in hand in this coming of age drama from Iranian director, Maryam Keshavarz.  It starts off as a fairly formulaic affair focusing on a group of friends kicking against the system of contemporary Iran but soon edges towards a strikingly sensual and provocative story of forbidden love between two lesbians.

Atafeh (Nikohl Bosheri) and Shireen Sarah Kazemy) are clearly in love. Both coming from enlightened backgrounds of affluent Tehran society, Shireen’s parents were victims of the strict regime, Atefeh’s are a professional couple.  Thirty years ago they would have had the glamorous lifestyle of young Westerners but that was pre-revolution and nowadays they could be arrested for holding hands. But when Atafeh’s brother Mehran (Rezo Sixo Safai) turns fundamentalist as a throw-back from addiction and starts laying down shariah law with predictable consequences for all concerned, the picture becomes darker.

Strong images of female discrimination drive the narrative forward and the girls are subtle and convincing as friends and lovers but the standout performance comes from Rezo in his slow and and sinister transformation from sensitive musician to controlling religious bigot.