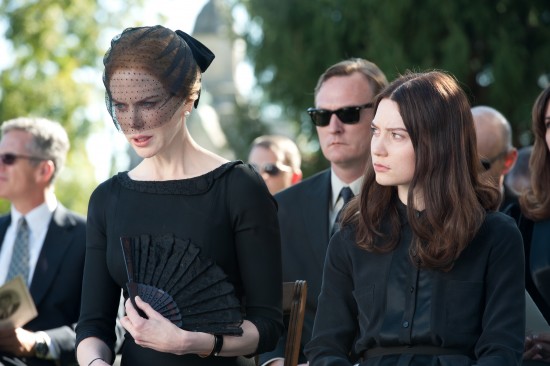 After the blatant bloodiness of OldBoy and The Last Stand, Stoker opens as a lush arthouse drama In English, for a change.   With magnetic performances from Nicole Kidman, Mia Wasikowska, and Matthew Goode this visually acute and tightly-scripted study is of family dysfunction brought into focus when Uncle Charlie comes to visit his niece India and widowed sister-in law Evie after the tragic death of his brother Richard.

Uncle Charlie sends shockwaves of potent sexuality through the females in the family with his hypnotically powerful presence. Both women develop a visceral attraction to him but Uncle Charlie’s glib smarminess also belies a secret that slowly starts to unravel and we discover that his smart clothes and accessories, designed by Kurt and Bart, don’t just cut a sartorial swagger.

Chun-hoon Chung, his regular cinematographer (Oldboy, Lady Vengeance and Thirst), knows his lenses like the back of his hand and uses them to sublime effect to create a sumptuously stylised and visually impeccable portrait of social dynamics. Shot in a palette of pistacchio, eau di nil and aqua spiked with cinnamon, Stoker has the emotional feel and distance of an Edward Hopper painting with Hitchcockian undertones.  There are also servings of the auteur’s brutal signature violence lightly steamed through with the swampy heat of Tennessee all set to Clint Mansell’s discordant score.  Chang Wook Park may have gone to America but his indie streak and black humour is very much alive and kicking. MT