Spike Jonze is best known for Being John Malkovich and Where the Wild Things Are.  Her is his first outing with an original script of his own. Looking into the future it imagines a pastel-coloured dreamscape of downtown LA,  where a lonely Hobbit-like dweeb (Joaquin Phoenix), bereft from his marriage break-up,  falls hopelessly in love with his laptop’s artificially intelligent operating system voiced by the dulcet tones of  Scarlett Johansson.  Well which red-blooded man wouldn’t? 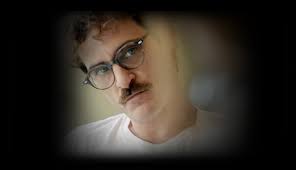 In Jonze’s film, the online world and reality collide providing a parallel universe where educated and polite characters interact sweetly with each other in high-waisted trousers. This premise is both plausible and unsettling, but more importantly, underscores the increasing laziness of social communication, where physical interaction is limited to the minimum and everyone relies personally tailored menus run by online personal advisors.  This is a world where all human needs are met inclusively online – well almost exclusively. This sounds practical until it creates a society where brains become hard-wired to rely on screens and buttons rather than real faces and human chemistry and social and emotional intercourse starts to become alien to the human race.

But let’s not get too morose.  Jonze’s drama is a light and fluffy affair enveloping a heart of glass,  As his characters tailor their online information to reflect personal preferences, eliminating undesirable elements at the stroke of a finger, so their real relationships go down the tubes.  Chilling and scarily believable, Jonze captures the zeitgeist of this future perfectly but, in doing, inadvertently creates a film that can have no heart or soul. In one scene, Phoenix’s character tries to make love to a call-girl sent by his advisor, while she talks him through the motions with fascinating results. Like candy-floss, HER looks appealing and but is forgettable several hours later.  Or maybe it’s just not all of us are ready for this type of existence.  MT