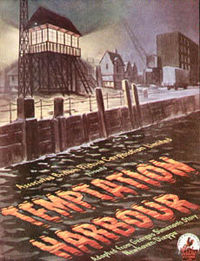 The story of Temptation Harbour is straightforward but morally complex. One night a railway signalman on the quay observes two men suspiciously embarking from a ship. Later he witnesses a fight between the men for possession of a suitcase. A man is deliberately pushed into the water and the killer runs off. The signalman retrieves the suitcase to discover it contains £5000 in banknotes. The police are not informed. He hides the case in his house. Conflicts concerning family trust, the appearance of a femme fatale and further violence ensue.

Lance Comfort’s Temptation Harbour (1947) is one of three film adaptations of Georges Simenon’s novel L’homme de Londres: Newhaven-Dieppe. The other two are Henri Decoin’s L’homme de Londres (1931), and Bela Tarr’s The Man from London (2007). The 30’s French version is moody but stolid (An earnest voice-over ‘guilty conscience’ and a chanson-singing prostitute almost sink the production.) The Tarr film is brooding and metaphysical. Brilliantly shot in black and white but mysteriously abstracting Simenon’s story: making it more a Bela Tarr experience than a noir-thriller. Only the British film, Temptation Harbour comes closest to Simenon’s fatalism where his icy sympathy is tempered by the sensitive direction of Lance Comfort. Whilst a sense of the French cinema of the 30s and 40s (Quai Des Brumes and La Bête humaine) aids the atmosphere.

Film noir is a highly influential force in cinema: depicting a treacherous world of darkness and pessimism where characters engage, or deliberately strain your sympathy. Not normally a world in which much compassion is shown to those who do wrong. The word “generosity” doesn’t come readily to mind for its heroes, villains or even victims. Yet the noirish-stained Temptation Harbour has a warmly rounded sympathy for its signalman protagonist Bert Mallinson (Robert Newton) and his involved people, daughter Betty Mallinson (Margaret Barton) side-show performer Camelia (Simone Simon) and “the man from London killer” Jim Brown (William Hartnell). The emphasis is placed on vulnerability, understandable corruption and stress: all are highlighted instead of noir’s usual amorality, obvious greed and sweet revenge.

The degree of tenderness that Lance Comfort brings to this dark melodrama is remarkable. Bert Mallinson, Betty Mallinson and Camelia are played out as subtle variations of innocence and experience. Bert is basically a decent man who holds onto the £5000 realising it would be impossible to earn so much in a lifetime of work. Betty is a kind daughter who (in her father’s eyes) does wrong by stealing some kidneys from the butcher’s she works at – a small misdemeanour, but enough for Bert to momentarily ‘flaw’ her character. Camelia is an unhappy orphan of the war, now trapped into playing the part of a ‘radio-active mermaid’ beauty in a tacky fairground act. She want to escape and tries to seduce Bert, with his suitcase of money, for this is her only means to return to a comfortable life in France. Even the killer Mr.Brown is treated with compassion once we learn the circumstances that led him to crime – a distressed Mrs.Brown (Joan Hopkins) is brought in for questioning by an ex-detective, Inspector Dupre (Marcel Dalio)

Temptation Harbour pays homage to both Jean Renoir and De Sica. Renoir for the film’s overall intense sympathy and De Sica for the lovely attention to detail and atmosphere that Comfort brings to the scene involving daughter Betty as she prepares her father’s breakfast. The camera accompanies her in a manner echoing the long sequence featuring the maid preparing for the day, in De-Sica’s Umberto D.

The film’s father/daughter relationship is handled with tender insight and affection. The rupture of this family bond emotionally breaks the recently widowed signalman, as much as his futile holding onto the money and a final act of self-defence. Robert Newton is excellent as the conflicted father. Margaret Barton (who began her film career as the tearoom waitress in Brief Encounter) gives a superb performance that is both heartfelt and poignant.

Bleak tale though it is, Temptation Harbour has humorous episodes. Irene Handl’s fake playing of the piano at the show and Simone Simon’s bored and detached delivery of her theatrical patter are beautifully comedic. It’s a perfectly cast film but not quite note perfect. There’s an extended voice-over by Robert Newton – the director ought to have trusted his actor to suggest character dilemma through looks. Yet this is a slight flaw in a moving and exciting film.

It seems that betrayal, error and the confused aspiration to a better life spill out from the family to encompass the needs of the other characters. It’s just after the Second World War and people are still poor and desire transformative social change. Lance Comfort and co-scriptwriter Rodney Ackland (author of the play Absolute Hell (1952) set in a club on the eve of the 1945 general election) plant this sub-text into their crime film. A better life, to remain decent people, avoid messes like the one Bert Mallinson has got himself into, and improve themselves, are their aspirations making up a redemptive goal – not in a religious sense – but for a deserved material well being. The urgent need to escape from an austere Britain of rationing and ‘making things do’ hangs over everyone.

“How by 1945, at the apparent birth of a new world, did the ‘activators’ – politicians, planners, public intellectuals, opinion-formers – really see the future? And how did their vision of what lay ahead compare with that of ‘ordinary people?’ The overlaps and mismatches between these two sets of expectations would be fundamental to the playing out of the next three or more decades.” Austerity Britain 1945-51 – David Kynaston

Temptation Harbour works as a social critique; film noir; domestic drama and crime movie. Visually stunning camerawork by Otto Heller creates much fine and appropriate shading of the foggy harbour and the house and hotel interiors. Mischa Poliansky’s music is very effective – particularly in the heart-rending final moments: Father locks up the house and says goodbye to his daughter, the music surges in and up with a Rachmaninov-like tone and power.

Temptation Harbour is rightly regarded as Lance Comfort’s best work and for me should be viewed alongside Cavalcanti’s They Made Me a Fugitive – also photographed by Otto Heller. It’s fascinating to compare the Fugitive spiv-corrupted London with the dangerous Folkestone of Temptation Harbour, as both were released in 1947. Fugitive has a demobilised RAF pilot Clem Morgan, played by Trevor Howard, drawn into a world of crime. Both Morgan and Mallinson seek justice either in the form of regained dignity (Fugitive) or deserved materialism (Harbour) and are impatient for the new world to deliver. Unfortunately Cavalcanti’s disillusioned ex-serviceman and Comfort’s corrupted signalman are left at the end with their fate uncertain (Only in The Man from London version of Simenon’s novel and L’homme de Londres is Mallinson sort of let off, by the police inspector, from his ‘crime’.)

The film has not been available until recently due to issues with the Simenon family estate, Temptation Harbour can now be viewed on the BFI online player for a small rental charge. I saw it this month at a one-off screening at the Southbank and their beautiful archive print, of what is probably a minor masterpiece, really ought to be released on blu-ray. Alan Price©2018