There’s a moment near the beginning of Rush, Ron Howard and Peter Morgan’s new biopic of racing drivers James Hunt and Niki Lauda, when the owner of Hunt’s Formula Three racing team proclaims: ‘Men love women, but even more than that, they love cars’. Coming, as it does, after a loud opening sequence featuring extreme close ups of engines, tyres and grass being torn in two by the speed of racing cars, and a scene in which Hunt swiftly seduces a nurse, it would seem that the filmmakers also revel in these same objects of desire. Thankfully for those who want for more than female nudity and fast cars from films, their interests don’t end there. 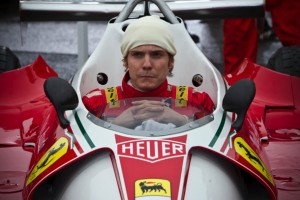 As the Rush progresses, it builds a detailed and engrossing portrait of two men connected by an obsessional, almost self-destructive need to drive (and, one could say, to perform – and, in this, the film traces a cinematic vein harking back to Raging Bull and The Red Shoes). As the film charts the parallel rise of Hunt and Lauda to the Formula One big-time, it often seems at pains to point out the connections between the two men (not least the fact that their parents each wanted more ‘respectable’ careers for them). But the film also delights in highlighting their differences: where Hunt is an impulsive hot-head, Lauda is a cool, methodological thinker. This may be the story of a so-bitter-its-a-friendship rivalry between two sporting legends, but it’s also an exploration of the dual nature of being, of the Apollonian and the Dionysian tendencies that dwell within us all. And, in fact, the associations that notion brings with it resonate further through the film: at times, Rush almost feels like a myth of fearless heroes who face death in pursuit of the higher glories of fame and fortune.

It’s something of a shame, then, that Lauda is never really made to be likeable. We’re constantly reminded that other drivers, even his own teammates, think he’s an arsehole. At one point, he’s even shown looking like the devil incarnate – as reflected flames lick up and down his body he complains: ‘Happiness is the enemy. It weakens you…Suddenly you have something to lose’. While Lauda ultimately becomes a sympathetic figure, one can’t help but feel that a more nuanced characterisation throughout might have been beneficial. In a sense, the story is Lauda’s tragedy, but it is presented as Hunt’s victory. The filmmakers, it would seem, favour the Dionysian – even if the factual coda perhaps shows fate leans otherwise. This isn’t the film’s only misstep (there’s a questionable use of voiceover, and a final scene which feels the need to spell out the film’s subtext in case the audience missed it), but ultimately it feels a little churlish to dwell on the negative. Taken as a whole, Rush succeeds in being an intelligent, entertaining and exciting ride. Alex Barrett.

RUSH IS ON DVD from 27 January 2014 COURTESY OF STUDIOCANAL.