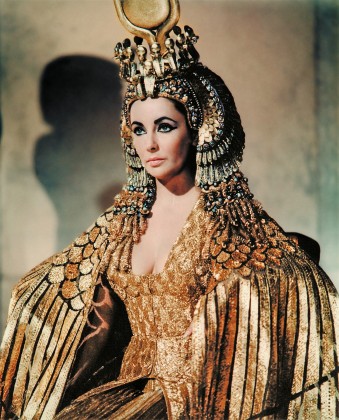 Joseph L Mankiewicz’s 1963 version of Cleopatra is a romp and the most magnificent romp that you’re likely to see this year.

Now re-mastered in florid technicolor, this dazzling epic had an original budget of a whopping $44million, nearly bankrupting Fox Studios. Filming took those involved through nearly three years of their lives.

Infact, the gradually deepening suntans of the cast bear witness to this lengthy project which started in London in 1960 and re-located to Rome, in search of a more favourable climate, where it finally wrapped over two years later after the original director, Rouben Mamoulian, had been sacked and Mankiewicz hired, fired and hired again in a bizarre turn of events where he was forced to re-write the script after shooting had begun.

But this was not the only set-back, Elizabeth Taylor nearly died of pneumonia during filming and was forced to undergo an emergency tracheotomy, the scar is still livid and visible in most frames. Her extensive range of no less than sixty five different rigouts.  Not to be deterred, she gives a glowing performance exuding grace and persuasive feminine power and sex appeal, her legendary violet eyes glittering under the weight of increasingly elaborate eye-shadow.  This performance not only netted her a record $1million contract but also the undying love of Richard Burton: their affair made headlines and brought intense publicity to the production.

The film opens with a masterful Rex Harrison who plays an ebullient but fair-minded Julius Caesar, victorious in his defeat of Pompey but creaking with back problems and vulnerable to the sedicious charms of Taylor’s Cleopatra, who arrives notoriously wrapped in a carpet.

One of the extraordinary things about this production, apart from the elaborate sets, monstruous props, fabulous costumes, bronzed thighs peeping from leather battle-dresses and sculpted Nubian Slaves a-plenty, are the unexpected and often incongruous faces from the pas who went on to more banal productions: Richard O’Sullivan (Bless This House) as a teenage Ptolemy, and George Cole, who went to become Arthur Daley, as Flavius. Also starring here is a strawberry blonde Roddy McDowall as the sly, scheming Octavian. 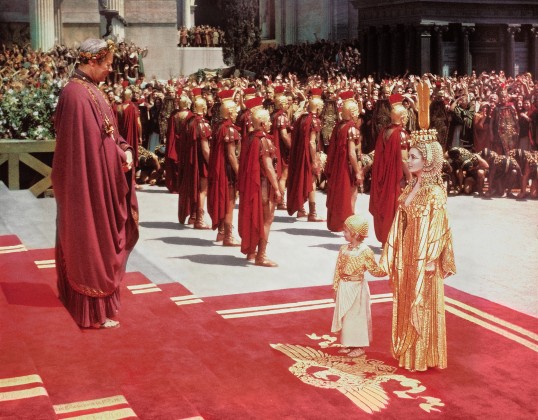 Caesar and Cleopatra are a force to be reckoned with as their plot for World domination takes centre stage, in the first part, and is sealed with the birth of Caesarion, adding a further boost to Caesar’s ego. Peter Finch was originally to play the role of Caesar but there’s a masculine joviality to the world-weary casting of Rex Harrison which works rather well here.  Gwen Watford is suitably elegant and restrained in the role of the long-suffering Calpurnia.  After Caesar is stabbed in the senate, Octavian takes over and forms a triumvirate several years later with arrival of Richard Burton as Mark Anthony while Cleopatra has returned to Egypt.

The onscreen chemistry of Burton and Taylor is the vital ingredient that illuminates the post interval segment of this production. It’s quite clear that these two are falling in love, both on and off-screen.  But Burton is a more vulnerable and blustering masculine figure compared to the more statesmanlike Rex Harrison. As Mark Anthony, Burton becomes intoxicated literally and metaphorically with the image of Elizabeth Taylor’s Cleopatra. And she is suitably incandescent when Octavian arranges his ‘marriage’ to his sister Octavia, another slightly questionable casting of ‘Upstairs Downstairs’s’ Jean Marsh.

Full of glamour, pageantry, inflated egos, botched battle scenes and bloated banquet scenes courtesy of John DeCuir who went on to win an Oscar for the production.  In fact, Cleopatra more or less swept the board at the Academy Awards that year in 1963 winning  and the only cut back  here was to the final edit which was taken of just over three hours from a massive six-hour director’s cut. Truly a legend. MT
CLEOPATRA IS ON GENERAL RELEASE AT THE CURZON, MAYFAIR and CINEMAS NATIONWIDE FROM 12th July 2013