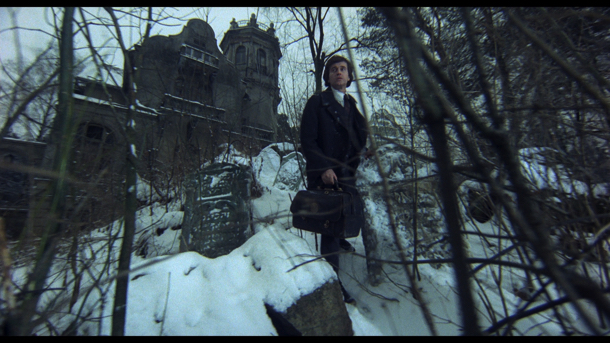 SANATORIUM POD KLEPSYDRA (THE HOURGLASS SANATORIUM) 1973 | directed by Wojciech Haas nine years after The Saragossa Manuscript is even more playful and anarchic. Josef (Jan Nowocki) arrives in the sanatorium of the title, only to meet his father Jacob, who has died a while ago. Looking out of the window, he watches himself arriving earlier, but by very different means. When he meets his mother, who is just eight years old, Josef starts to comprehend that time is of different nature in this sanatorium. His life rolls along a different timetable, his innermost hopes and fearful nightmares mingle. Haas never tries to rationalise the narrative, and it seems only logic, that Josef will be a captured creature for the rest of his life. The film features the assassination of Archduke Franz Ferdinand in Sarajevo re-enacted by an army of clockwork manikins, as well villagers dressed as exotic birds – Josef is always the spectator, but since his inner time-clock is shot, he sees the narrative as a dream, he is travelling from event to event without him (or the audience) being aware how he got there. Josef’s loss of retrograde memory seems to be opening his brain for any events, however startling. Haas direction is flawless and the production design is stunning. HOURGLASS SANATORIUM is as exhausting as original, the avant-garde film of Polish cinema of its era. 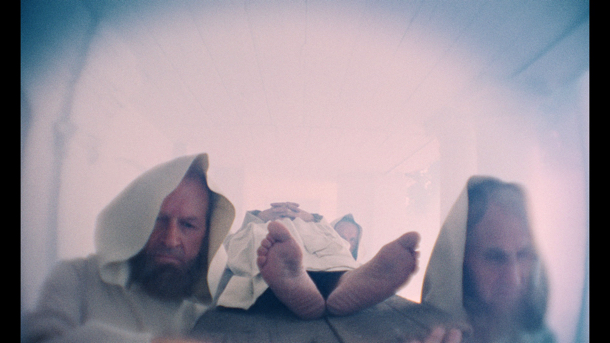 ILLUMINACJA (ILLUMINATION, 1972) is Krzysztof Zanussi’s most autobiographical film. At the beginning we listen to a tedious lecture by a professor, explaining the moment of ‘illumination’ when the brain sees the truth directly, thus make it possible for the person to attain wisdom. Cut to Frantizek Retman (Stanislaw Latallo), a physicist student at the university of Warsaw, whose vital statistics and cognitive prowess, are measured by a team of research scientists. Retman is drawn to this particular science, because he believes in universal laws und predictable phenomena. But his analytical and logical approach to live is tested, when he falls in love with a beautiful woman, but is rejected. Frantizek is obsessed with this loss, and (like the hero in Zanusssi’s “Camouflage”) takes to mountain climbing. He meets Agnieszka, with whom he falls in love, but who is already pregnant. She convinces Frantizek to marry her. They move into a mall apartment, where, to make ends meet, Frantizek volunteers for behavioural research. But he is overwhelmed by his responsibilities and interrupts his studies to find a full-time job. After a friend from the research clinic dies, Frantizek falls into a deep depression. It is not only his relationship with Agnieszka and the death of his friend, which lead to Frantizeks downfall. He looses his belief in physics as a ‘neutral’ science, when he argues with another student about the responsibility of scientists. Retman declares “that I am not responsible for the A-Bomb, because I did not participate in the research”. But the fellow student exposes Retman’s self delusion “But the inventors were physicists too”.

ILLUMINATION shows Zanussi at the height of his aesthetic brilliance: he has constructed ILLUMINATION like a kaleidoscope, where mosaics meet and form a new content. Like in one scene, when Retman interrupts his contemplation of the cosmos to have his palm read. His motive is very devious: he just wants to know how far off the palm reader is. Her answer, that Retman does not like himself; hits home, since it is anathema to Retman, who is very self satisfied. ILLUMINATION is an idiosyncratic and insightful contemplation on the relationships between science and art, precision and creativity, intellect and emotion – and a reflection on the human need for a personal balance of the above. For our full review SALTO (JUMP, 1972) is perhaps the most important film of Tadeusz Konwicki (1926-2015), best known as a novelist and script-writer of Mother Joan of the Angels. The film is set immediately after the end of WWII, when a young man (Zbienew Cybulski) – calling himself either Kowalski or Malinowski, later identified as Carol – jumps of a train and runs through the fields. For a moment one is not sure if this the sequel to Ashes and Diamonds, since Cybulski seems not to have changed, wearing the same sun glasses as in Wajda’s film and running wildly through the sparsely populated countryside. Finally he reaches a nameless town, where, so he claims, he has spent the war, in hiding. Nodbody seems to remember him, but then, nobody else seems to be very sure who they are themselves. Everyone’s identity is called into question – one starts to believe that they are all ghosts, which one character declares to be the truth. Carol makes the most outrageous claims, but always modifies his stories of the past when he is confronted with somebody who had witnessed the specific act. Carol claims that “he is chaste”, making himself out to beatific Christ-like figure. He even seems to cure two ill children, but the camera glides away at the last moment, so we miss the crucial death. Finally, the whole town is coming together at a dance celebration – the atmosphere reminds of Wajda’s Wesele (title image). The “Salto” dance, when all the town’s folk are locked together, is an affirmation of Polish identity, whilst the presence of a “chochol” (polish derogative for a Cossack soldier) might be a subtle hint of the political reality of the day.
The camerawork is fluid, graceful, the jump cuts between the scenes are disorientating, which gives the film a dreamlike flow. Finally, Cybulski jumping off the train at the beginning, seems now very disconcerting, since he was killed jumping on a train at a railway station in real life. AS 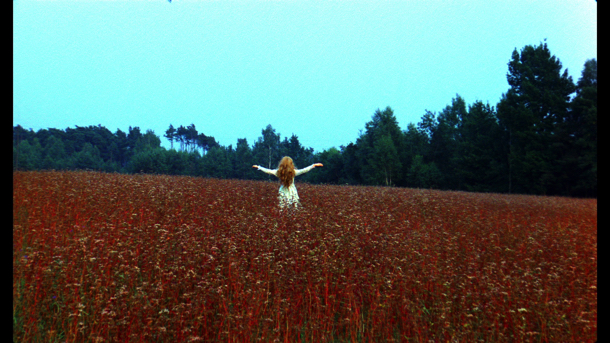 AUSTERIA (THE INN, 1983) is set in the Galician (now Polish) border with Russia in the first days of World War I. Jerzy Kawalerowicz’s film of the novel of the same name by Julian Stryjkowki (who also co-wrote the script) is controversial because of its description of Jewish pacifism, which led to the slaughter by Russian soldiers, and its parallels to the Holocaust. AUSTERIA is symptomatic for the difficulties Polish filmmakers had after World II in dealing with the lack of Polish resistance to the Holocaust committed in their country, and the fact, that more than thousand Jews, many of them survivors of the concentration camps, were murdered after 1944 in Poland. In the film, a Jewish innkeeper Tag (Franciszek Pieczka) is trying to keep some sort of order during the first hectic days of the war. Austrian troops manning the border, are on the retreat, Hassidic Jews from an nearby village arrive, panic stricken. An Austrian baroness and her family seem to have nothing else to do than settling private scores; and a Hungarian hussar, who has lost contact with his regiment, is more interested in sexual escapades than finding his way back to his troops. A young Jewish village girl is killed, and the rituals of her funeral are causing difficulties. The Hassidic Jews discuss Talmudic questions, before being slaughtered by the advancing Russian soldiers in a nearby lake. Whilst the film is a realistic portrait of the chaos and viciousness of the emerging war, its underlying ideology that Jews were slaughtered because they did not put up resistance is apologetic – centuries of pogroms in Poland are proof of a violent anti-Semitism.

AKTORZY PROWINCJONALNI (PROVINCIAL ACTORS, 1978) is Agnieszka Holland’s debut film. Set in a small town in contemporary Poland, a Warsaw filmmaker (Burski) comes to direct a small touring theatre troupe in Wyspianski’s ‘Liberation’, a patriotic Polish classic. The main actor, Krzystzof, wants to make a name for himself, and tries to influence Burski to stick religiously to the text. But Burski has other ideas: he wants to change the play into a sensational avant-garde version, cutting the text down to the bone. Krzystzof fights the director all the way, but after the premiere, he gives in, making peace with Burski, to save his career. But his marriage to Anka, a puppeteer, is on the rocks. Anka leaves her husband. She too, has come to realise through experience,  that advancement in society comes with a loss of innocence. Whilst Holland’s actors as not particularly sympathetic – the usual gossip about which actress sleeps with the director, a gay outsider and an alcoholic – society is blamed as much as the individual. Anka is shown as an idealistic dreamer, who still reads Heidegger, and is ridiculed by her husband. Krzysztof starts using great words like “homeland, human fate and freedom” from the play, to make himself look different from the rest, but he is only too ready to fall in with Burski’s interpretation. His attempted suicide is just an act, he then runs to Anna (whom he had just condemned as naïve), like a little boy to his mother. Contrary to some western perception, PROVINCIAL ACTORS, which won the ‘FIPRESCI’ prize in Cannes, is not a thesis film, Holland declaring”I don’t know how far I have been successful, but in ‘Provincial Actors‘ I was less concerned with showing the mechanism of manipulation, and more with presenting human fate, in all its embroilment and entanglement. That is, I tried to highlight the existential aspect rather than a journalistic one. I didn’t want a film with a thesis, though I have sometimes been accused of this”. 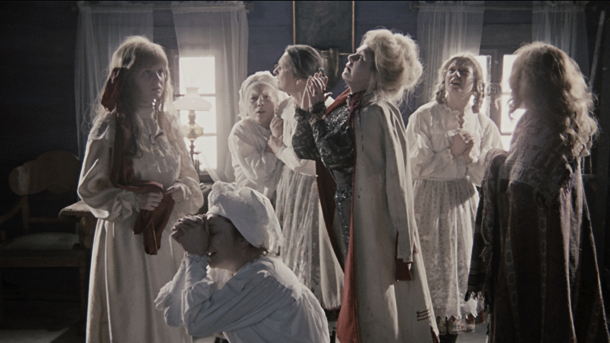 WESELE (THE WEDDING, 1972) is one of Wajda’s most complex films. Based on a play by Stanislaw Wyspiansky written in 1900, THE WEDDING is an hallucination in the mist of the countryside, where guests at the party are visited by figures from Poland’s past. Set at a time when no Polish state existed, the groom, a journalist from Krakow, is a member of the intelligentsia, and marrying the daughter of a peasant. During the five-and-a-half minute opening-credit sequence, we follow the cortege with bride and groom going from the church through the countryside, with menacing soldiers lurking everywhere, to the house where the celebrations will be held. By now darkness has fallen and fog encloses everything. At the ceremony, the guests participate not so much in a party, but a comedy of manners, where everybody seems to chasing everybody else. Arguments ensue, and the free-for-all atmosphere degenerates into bitter fighting: the intelligentsia versus the peasantry; Poles against Jews; town’s people versus the rural population, the educated complain about the uneducated and, last but not least, women and men fight with great rancour. What follows are apparitions of Polish historical figures, who engage with the wedding guests in discussions about the way forward to Polish unity and statehood. Scenes from battles are replayed: the peasant army attacking the Russian troops in the successful battle of 1795, the same peasantry being slaughtered in the rebellion of 1846. None of the participating groups is shown in a favourable light: most of them prefer drink and day-dreaming to action, men seem to cheat permanently on their women, the artists are decadent and nobody seems to care much about the social inequalities. In the end, symbolically, the ghost of Wernyhora, an ancient Polish leader, presents the wedding party with a golden horn, to start the battle for independence. But soon, the horn is lost by the marching men outside, amidst the all-engulfing fog. A dreamlike journey through Polish history, told in poetic and expressionistic images, a picturesque yet nightmarish feast.