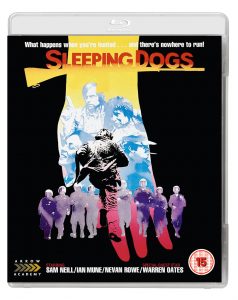 Tightly scripted and tense, SLEEPING DOGS is the gritty political action thriller that revolutionised New Zealand filmmaking, kicking off its New Wave movement at a time when the country was not well known for its cinema, at the end of the 1970s. Resonating with audiences at home and abroad with its themes of politics and personal struggle, it also launched the Hollywood careers of Sam Neill (Possession) and director Roger Donaldson (No Way Out). Neill, in his first lead role, plays a mercurial young man escaping his failed marriage and two kids by taking temporary refuge in an island off the Coromandel Peninsula Meanwhile at home, political turmoil and an oil embargo leading to civil war is drawing him slowly but surely back into its claws. Warren Oates is also brought into the conflict as the commander of a US army unit. Together, they fight against the country’s dictatorship, in a narrative based on C K Stead’s novel Smith’s Dream. Amazingly, Donaldson enlists the cooperation of the NZ Air Force in this entertainingly subversive and occasionally surreal action thriller. MT.

ON BLURAY COURTESY OF ARROW FILMS FROM 16 APRIL 2018