Four years after this film was made, Myrna Loy – then Queen to Clark Gable’s King of Hollywood – played his wife in a glossy ‘A’ list trifle suggestively called Wife vs. Secretary (1936). The wife of the title is a whiny gold-digging shrew whose charm resides solely in the enormous charisma of the actress playing her; while the racy title is belied by making the newly ‘brownette’ Harlow brisk, efficient and wholly honorable in her intentions toward husband Clark Gable.

When I saw it I thought it would have been a much more interesting film if it had been made Pre-Code with Loy playing the secretary and Harlow at her sluttiest and most peroxided as the wife (as in Dinner at Eight). The same thought occurred to me watching The Animal Kingdom. Being pre-Code, it’s able to be frank about the role that sex plays in the various characters’ interrelations without being too flippant about it either, since it’s really about relationships rather than sex (rather as Douglas Sirk’s glossy melodramas of the fifties tended to be) and views a husband leaving his lawful wedded for his on again-off again mistress with active approval. 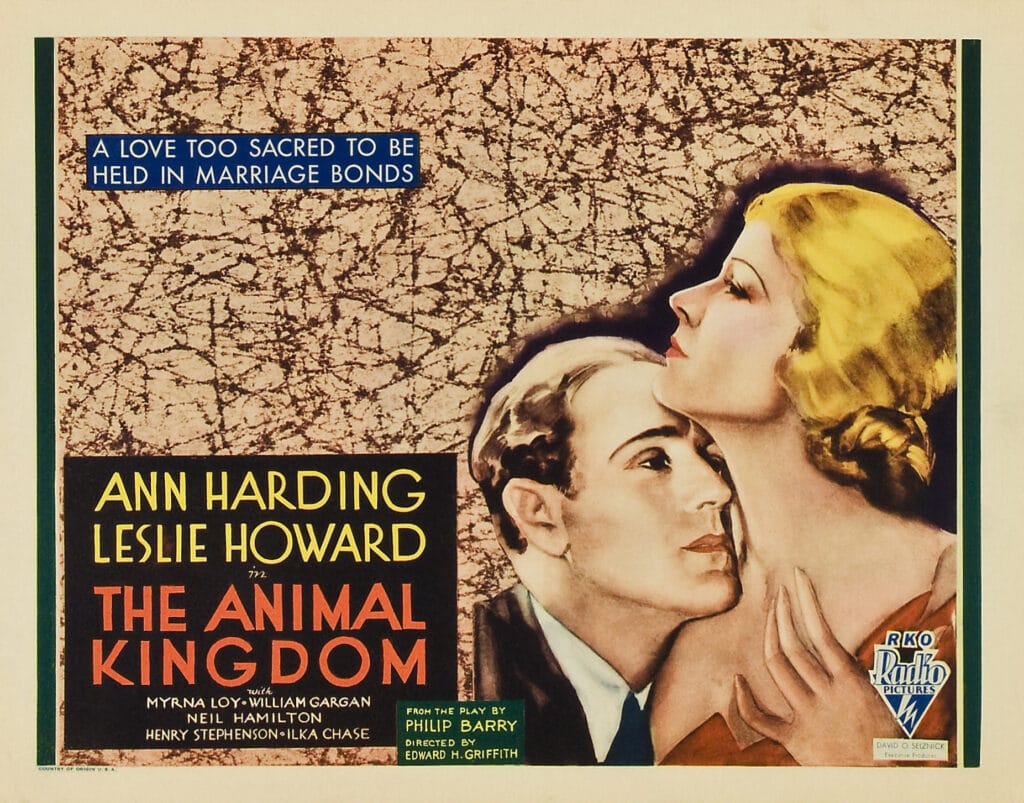 Loy’s name isn’t even included on the title card but she actually gets far more screen time than Ann Harding as the mistress and is obviously offering husband Leslie Howard passion (when she feels he’s earned it) of an order he plainly hasn’t known with Harding for some time. As in real life the characters have made exasperating life choices (Loy herself in reality notoriously made four wholly unsuitable choices of husband).

Loy is here charming but mercenary and manipulative, while Harding seems very prim for a supposedly “promiscuous” (yes!, that’s the word that Loy – no less – uses to describe her) bohemian who has allowed her physical relationship with Howard to wither on the vine, yet is still affronted that Howard should have the temerity to seek more… stimulating companionship elsewhere. The fact that he nonchalantly leaves her apartment while she just carries on talking in the next room speaks volumes about the state of the relationship.

Within minutes of primly branding Harding “a promiscuous little…!” Loy reveals herself to be not above finally stopping teasing poor Neil Hamilton and giving him a little of the “excitement” he’s plainly been gagging for since the film began if he’ll perform a professional service on her behalf. Having until now shown himself to be weak and easily manipulated, Howard at the film’s conclusion draws upon hitherto unsuspected reserves of iron self-control – that would certainly have been well beyond me – to turn his back on a bedroom door on the other side of which the delectable Loy is undressed and waiting for him.

All the acting is good – particularly William Gargan recreating his stage role – and Loy was always effusive in her praise for the guidance she received from the film’s largely forgotten director Edward H. Griffith. Also fascinating is the diorama of the Brooklyn Bridge visible through the window of the New York apartment occupied by the supposedly penniless Harding. @Richard Chatten