Director James Russell’s passion for music and multi-camera flair is showcased here in this close-up and personal experience of Morrissey performing live in the confines of the Hollywood High School arena in March 2013. Serving it up straight and simple, topped and tailed with idolatrous vox-pops from the visiting fans,  James Russell does not try to put his own creative 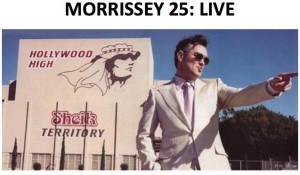 spin on the proceedings or to compete with the iconic star.  This is Morrissey’s show marking 25 years of a solo career for the enigmatic English singer and lyricist, who has risen considerably in stature since the days of The Smiths when he rose to fame in 1984 with the words: “Heaven Knows I’m Miserable Now”.

Thirty years later at this intimate gathering he gives the impression of still being pretty miserable. But he’s made his fans extremely happy and they all tell him so in mass hysteria grabbing the microphone when he asks in between songs “Do you want to talk?”. He certainly knows how to connect with his audience without giving away anything of himself, retaining an aura of alluring disdain that occasionally belies the revealingly emotional but candid content of his lyrics, delivered in a strong voice, mournful and mostly off-key.

Running through a range of new material and classics from “Alma Matters”, “Let Me Kiss You”, “That Joke Isn’t Funny Anymore”, “Please let me get what I want” and “The Boy With the Thorn in His Side”, Morrissey has an impressive and powerful animal physicality about him. Moving about the stage with relaxed ease,  his blue eyes, broad shoulders and beautifully delicate hands sporting yellow-varnished nails, He’s a man in control of his own destiny but he has no illusions about where that may be.

The camera loves him but he’s oblivious to the filming process focussing firmly on his musical performance and his fans and treating them to regular handouts of his sweat-drenched designer shirts and handshakes as he bends forward into the crowd with impressive athleticism.  By the end, fans are climbing onto the stage to embrace him before being carried away by security guards. Mystique, charisma, the ability to connect on a deep level: whatever it is, Morrissey has it in spades and James Russell’s film has captured it for posterity. It’s a wonderful thing. MT