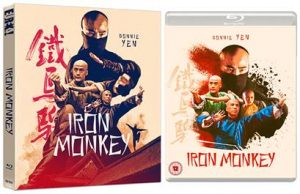 Wong Kei-ying (Donnie Yen; Ip Man, Rogue One), a physician and martial artist, is mistaken for a masked vigilante known as the Iron Monkey (Yu Rong-kwong); a Robin Hood style hero who has been robbing the wealthy local officials in order to provide medical treatment for the poor. The two men must team up to defeat a corrupt political regime, and protect the lives of the people whose cause they champion.

A disappointing outing for director George Nolfi (The Adjustment Bureau), featuring a young Bruce Lee and his legendary fight with Shaolin master Wong Jack Man in San Francisco in 1964. Writers Christopher Wilkinson and Stephen J. Rivele are certainly no Philip K. Dick, the novelist of The Adjustment Bureau, and Nolfi seemingly appears only as good as the material he is presented with.

Recut from the version which ran at TIFF 2016, Birth features Steve (Magnussen), a young student of Bruce Lee (Ng)who soon leaves his training with Lee to join Master Wong Jack Man (Yu), who has fetched up in San Francisco after injuring a fellow competitor by delivering a forbidden kick. Wong wants to ‘cleanse his soul’ and become pure again, but is not particularly humble, and soon attacks Lee for his fighting style. The two thrash it out, with Wong sparing Lee’s life. Meanwhile, Steve has fallen for the waitress Xiulan (Jingjing), who is in thrall to a female crime boss (Jiu) who is threatening to put her into prostitution, if she doesn’t cut her ties with the young trainee. Lee and Wong cooperate, to set her free. And whilst the future Kung Fu King changes his fighting style to something less spectacular, Wong returns to his monastery. BIRTH has the feeling of an old-fashioned Hollywood gangster movie, underpinned by the backdrop of an idealised 1970s San Francisco. The “narrative” is as slight as the snake-hipped fighters, and everything is held together by the fighting numbers. For committed Lee/Kung Fu fans only. AS

ON RELEASE AT ARTHOUSE CINEMAS FROM FEBRUARY 23, 2018