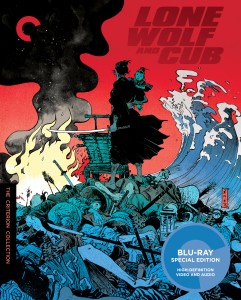 The cult series of six films based on the internationally best-selling Japanese Manga Comics explore the vengeful antics of the shogun’s executioner Itto Ogami (Tomisaburo Wakayama) who is Japan’s answer to Charles Bronson. Roaming the countryside with his beloved boy offspring Daigoro (Akihiro Tomikawa) this is a chanbara sword and blood fest par excellence, delivering stylish thrills and a body count that beggars belief, played out in searingly violent and gracefully choreographed action sequences contrasting with tender moments between father and son. A must for collectors.

Sword of Vengeance; Baby Cart and the River Styx; Baby Cart to Hades; Baby Cart in Peril; Baby Cart in the Land of Demons; White Heaven in Hell have been impressively remastered for bluray in sparkling 2k restorations.

Since his European breakthrough with COLD FISH (2010), Japanese director’s Sion Sono’s film’s have increasingly done  away more with any meaningful narrative, relying on pure shock value as in his recent out WHY DON’T YOU PLAY IN HELL? (2013). It is therefore no surprise, that TOKYO TRIBE is an all singing/all-fighting/dancing/rapping box of tricks – and the rapping skills are dim to say the least – full of energy and spectacular fighting scenes, but vacuous to the extreme.

Based on a best-selling Manga-cartoon, TOKYO TRIBE features the city in the non-so-distant future, where 23 gangs rule their territories, coming down aggressively on any rival tribes that strays onto their turf. Sadistic, and occasionally cannibalistic, Lord Buppa (Takeuchi), directs the warfare between the other clans, hoping to claim dominion over the whole city. And when his day of ‘victory’ arrives, girls are dragged into Buppa’s dining room, desperate to become his prostitutes or even a tasty snack for his lunch.

Among them is the enigmatic Sunmi (Seino), who turns out to be the daughter of Buppa’s family priest. Sunmi is quite vanilla about being taken as a love object (even though she does not succeed): Not surprisingly, her father wants to sacrifice her as a virgin to Satan. Meanwhile, Buppa’s henchman Mera (Suzuki), shirtless and muscle-proud, hates Kai (Dais), for the simple reason that the latter has a bigger penis (!) and he tries to lure members of Kai’s tribe, peaceful loving hippies, into his palace, so he can do away with Kai. But the latter unites all the other gangs under his and Sunmi’s leadership and fights a successful battle against Buppa’s men. One of Buppa’s wives accompanies the mayhem singing wonderful Handel arias, but she too is sucked into a giant fan, which does away with the Buppa clan, including Buppa’s son Nkoi, who kept an array of living furniture. A car with chandeliers as headlights and a couple of earthquakes complete the mayhem.

This widescreen spectacle on a giant studio stage starts off as an exhilarating bandwagon but after a while, neither the cast nor he audience is able to sustains this high level maelstrom of activity as outrageous peaks and waves of activity follow each other fast, like breakers on a stormy beach, leaving no pause to contemplation in the permanent frenzy. The inadvertent humour adds to a feeling of a monstrous, but utterly empty production, super-fast food for the boy’s own brigade who have left their brains and their consciousness behind them in the ticket foyer. AS