Thirteen years ago I visited Tokyo and saw a Kabuki play at their National Theatre. I was captivated by the long, elongated structure of the stage and its carefully assembled musicians and actors deliberately creating a stylised composition akin to, and obvious progenitor, of wide-screen cinema. Immediately I thought of Kurosawa’s The Hidden Fortress. And then Kon Ichikawa’s remarkable An Actor’s Revenge.

There have been many period films drawing upon Kabuki within strong storylines. Mizoguchi’s marvellous The Story of the Last Chrysanthemums is perhaps the most outstanding. But An Actor’s Revenge is most successful at drawing the viewer in to create the dual illusion of watching a play whilst experiencing a film, where each cinematic flourish of action is seamlessly fused with a theatrical gesture. Ichikawa skilfully avoids kitsch or camp excess (admittedly An Actor’s Revenge has a pulp fiction quality, yet I would distance myself from critics who underline its ‘fun’ and sense of the absurd, whilst playing down the poignant elements of the story). 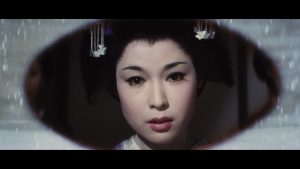 The film is set in the late 1830s. Yukitaro (Kazuo Hasegawa) is a male actor who plays female roles and his stage name is Yokinojo. Whilst in Edo, acting in a play, he notices in the audience the three men who were responsible for the death of his mother and father. He is persuaded by the Hirutaro (Raizo Ichikawa), the head of the acting troupe, to take revenge on the murderers. Yet Yukitaro decides to drive them to a ‘theatrical’ madness before killing them (he announces his revenge will be “a flamboyant performance”). Unfortunately he is emotionally sidelined by the daughter of one of the guilty men. Namiji (Ayako Wakao) is genuinely attracted to Yukitaro and desires a romance. Initially, he sees her attention as a pretence to trapping him but gradually realises that she is sincere. Yokitaro’s revenge is achieved but on the way it is challenged by erotic attraction and the self-mocking criticism of a thief Hojin (Shintaro Katsu) who is continually pursuing the actor.

You could easily make out a case for An Actor’s Revenge being over-plotted and confused, making the viewer uncertain of its pitch and tone – how seriously are we expected to take these events? Are they only artifice – implausible theatrical happenings? If you succumb to the film’s visual style (impossible not to) Ichikawa’s film is an involving aesthetic delight. An Actor’s Revenge may lack Mizoguchi’s tragic intense view of the acting life, but its own viewpoint of life as a bitter theatre of – maybe made-up – destructive affairs is still compelling. 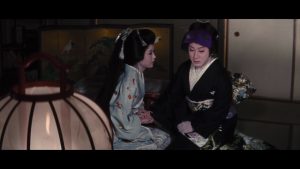 The film is completely set in the studio, making for a superb staging of action that intensifies its heightened theatrical ‘reality.’ This is a valid Ichikawa world where performers are cunningly immersed in the idea of performance (without ever being self-consciously aware of the effect they are striving to achieve). An Actor’s Revenge then becomes an intoxicating concoction when astonishing camerawork and a jazzy, lounge-lizard soundtrack are added to the mix.

For me, the fight scenes are thankfully the antithesis of modern martial arts productions. Swords glint and flash, choreographed against an inky blackness and have such abstract power – a ‘now you see the blade and now you don’t’ tease. And a scene where two thieves using a lasso to capture their victim is thrilling and balletic. All this is stunningly composed and edited with fantastic precision.

Kazuo Hasegawa reprieves a role he played in the 1935 film version directed by Kinugasa, and is terrific in conveying the contradictions of a Kabuki actor not always in control of his revenge plan or able to see its consequences. A rival actor says he is “A pale-face cross between a man and a woman” Yukitaro has an indeterminacy of sexual presence. You cannot take your eyes off him. Nor can his young lover – the beautiful Ayko Wakao – who is both elegant and touching.

Ichikawa’s tale often heads for a potential artistic divorce yet he technically keeps turning the key in the lock to hold the tension between melodrama and an expressive form that exhilarates. In the history of scope cinema An Actor’s Revenge has to be of the first order. To coin a pun – the imaginative scope of its use of scope still displays a mise en scene of considerable power. ALAN PRICE©