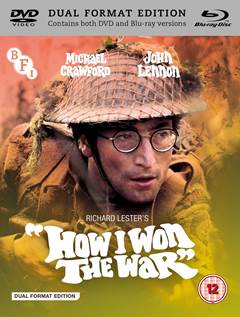 In 1967 John Lennon took a break from the band and travelled down to Almeria in Southern Spain where he still managed to write the lyrics for Strawberry Fields Forever while starring in Richard Lester’s surreal comedy. Aside from its merits, the film was always going to be a talking point and would ultimately become a cult classic and one of the most appealing anti-war satires. Based on Patrick Ryan’s book, Charles Wood’s script sends up the British Army in a way that is both harmless and enjoyable.

John Lennon exudes an easy charisma as the bespectacled Private Gripweed, eclipsing Michael Crawford in his role as the incompetent Lieutenant Goodbody leading his troupe of hapless soldiers into active service in Europe and North Africa during the Second World War. Roy Kinnear, Michael Hordern and Jack MacGowran complete the wonderfully witty and watchable cast. MacGowran also polished off another dark comedy role that year starring in Polanski’s Fearless Vampire Killers. Lester’s direction often misfires but in a way that is retrospectively endearing given the nostalgic nature of the subject matter – cricket. A lovely, amusing walk down memory lane. MT