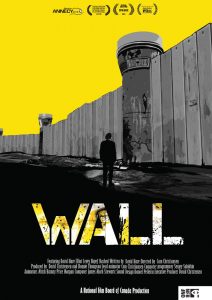 When Canadian producer David Christensen listened to David Hare’a 2009 Podcast Wall, a monologue about Israel building a wall between them and Palestine, he knew that animator Cam Christiansen would be the right person to tackle the project. The result, a mixture of 3D motion capture technology, documentary and hand drawn animation, is an aesthetically stunning portrait of the 708 km long wall, so far amounting to 4 Billion US dollars since building began in 2002. The political and human cost cannot be put into figures, and Hare’s script does not always allow us to come to terms with the numerous contradictions.

Hare, who wore a Lycra suit for his first outing as an actor at the Pinewood Studios where the motion-capture footage was shot; is – symbolically – accompanied by the English/Israeli actor Elliot Levey and his Palestinian counterpart Nayef Rashad. Levey wants to stage a co-operation, something Palestinians are not fond of, because it would legitimise the status quo between Israel and Palestine. Hare visits the Israeli novelist David Grossman, who is critical of his state’s policies, but admits that there must be a place where Jews feel safe. Driving along the monstrous wall from Jerusalem to Ramallah and Nablus, we see the damage the continuous war has done. Nablus, once the trading centre of Palestine, is a ghost city. The most famous cafe, where guests once fought for one of the 500 places, is a ghostly place where Hare and his friends are the only customers. Ramallah, the seat of the Palestinian administration has had better luck: mainly because it is one of the few places not mentioned in the scriptures of the main religions in the area. We learn that Hamas is not popular, they have won elections because the PLO is totally corrupt. Then there is the story of a man who has worked as in informer for the Israelis. Hamas, imprisoning him, then invented an innovative form of torture: on the wall of the cell, they have drawn a picture of a bicycle, asking the prisoner to fetch it, or risk torture. The journey is always interrupted by senseless controls by the Israeli forces, whilst a parallel road, fifty years in the future, will be reserved for cars with Israeli number plates, the traffic flowing uninterrupted. And the settlements, some even unlawful under Israeli law, overlook the West Bank in a very menacing way. But, the wall has stopped eighty percent of Palestinian terror acts in Israel. At the end, the black-and-white transforms into the colourful graffiti on the wall – not unlike those on the Berlin Wall.

Whilst the aesthetics are brilliant, the political agenda is questionable – but perhaps, this is only to be expected. Nearly seventy years of permanent war has destroyed any kind of hope. For Israel, this means the most powerful military force in the region has no influence on the state of mind of its citizens: Grossman mentions that most Israelis feel vey insecure. Perhaps the repressed diaspora thinking has returned, but whatever the arguments on both sides, the founding father of Israel, Theodor Herzl, did not envisage a Sparta in the desert.  AS

Tomer and Barak Heyman (Bridge over the Wadi) have always combined the personal and socio-political in their longterm documentaries shot mainly in Israel where Barak produced the award winning Lady Kul el Arab by the Palestinian filmmaker Ibtisam Mara’ana. This was a manifestation of her brother’s political statement showing a divided Israel, trying in vain to come to terms with a permanent war against Palestine.

Saar Maoz, the central figure of WHO’S GONNA LOVE ME NOW? is forty and lives in London. For the past eleven years he has been HIV Positive. An ordinary gay man, he sings in the London Gay Men’s Chorus but his life is ruled by the medication he takes which often has side effects ranging from nausea and muscle cramps to very disturbed sleep patterns. What makes Saar’s life even more difficult is his relationship with the family in Israel, where he grew up on a Kibbutz with six siblings. His father is a paratrooper who tells everybody with pride that all his children served in the same military branch like him, and he parachuted “with all of them, even the girls”.

During one of Saar’s visits; his father, in uniform, shows guests around the military monument “Ammunition Hill”, proclaiming a rather belligerent, un-reflective ideology of Israel’s right to annex Palestinian territories. Prior to this we had witnessed Saar reading a letter from his father, which is insulting on a personal level as his political ravings in Israel. But Saar still craves the love of his family and  blames them for his being thrown out of the Kibbutz, when his homosexuality became apparent: “They should have said, we are all going to leave the Kibbutz, if you exclude our son”. Obviously, this was far from realistic.

The only person who loves Saar unconditionally is his grandfather, who is old and frail, and will die during the filming. When Saar’s mother comes to London later she is helpless and has obviously not come to terms with her son’s homosexuality: “You are like a branch without continuity”. Whilst she loves Saar, she still hopes he will give up s his sexual orientation. During the film, Saar becomes a little more realistic: when walking with a friend round Brompton Cemetery, he remarks sarcastically that the Kibbutz will bury him, but “hey we’ll put that Queer only in the far away corner”.

When his father visits Saar in London he also displays a huge degree of insensitivity: sitting in an outdoor café, he remarks loudly to his son “are these also gay?’ when two young women walk by. Later he asks Saar “who is gay here?” as if the promenading people were so easily classified. But Saar’s parents are not the worst – by far. When Saar finally decides to go back to Israel, working for The ‘Israel Aids Task Force’, his younger brother is openly hostile: he is afraid his small children may get infected “when you move here, the risks are so much greater”.

The great strength of the film is the long-term observation, making the awareness (or lack of it) of the Maoz family much more apparent. Filming in London and Israel, the scale of the different environments is huge: the man employing Saar at the Aids Task Force points this out to him. But Saar is set for a reunion with his family in a country which will not welcome him with open arms: he will be a stranger both at home and in a society geared to male values, needed Israel is a militaristic society. The images are clear and well-0bserved, there is humour here but also overriding sadness for Saar, who wants more than anything to come home, without being really wanted by those he loves and values. AS