Michalis Konstantatos’s debut feature LUTON, initially appears to have about as much going for it as its eponymous Bedfordshire town.  Suffocating in the same washed-out visuals and bland aesthetic as recent Greek “Weird Wave” outing (and Venice-winner) Miss Violence, it opens rather like an episode of EastEnders on valium, Greek-style, with monosyllabic dialogue.  Following the workaday lives of three unconnected people: Eleftheria Komi plays Mary, a lonely solicitor looking for more than sex in her life, Saupountzis is Makis, a newsagent in a rut and Vlachakis is teenager Jimmy, trapped by his strict parents: all give performances of considerable appeal. 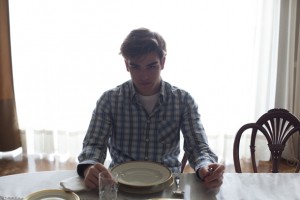 The film opens with dark-haired Mary exercising in the gym. We then meet Makis riffling through the pages of a newspaper, fag on the go, as he serves a blond customer.  Mary, then goes lingerie shopping for her night out. This dark lawyer is a dark horse and once inside the cubicle, she starts to fondle herself slowly. Meanwhile in a chinzy dining room, Jimmy has a stultifyingly silent dinner with his grandma and mum. Later in the park, a couple is snogging voraciously, endlessly: it’s Jimmy and his girlfriend. Mary’s evening at a nightclub ends in oral sex in the car park; no prizes for who’s the giver.  And so Konstantatos continues to flesh out the ordinary lives of his sad protagonists and we wait patiently for the drama in this drama to be unleashed.

When their disparate lives eventually collide it’s almost too fast to process, given the deliberately banal build-up.  LUTON is a slow-burner sharing its story cryptically, resentfully, eerily but eventually the pieces fall together in a cataclysmic meltdown leaving us mesmerised at its long-awaited denouement.  Bide your time, if you can,  and you will be rewarded. MT

LUTON IS SCREENING AT THE LONDON FILM FESTIVAL ON 20 OCTOBER 2013 AT HACKNEY PICTUREHOUSE.