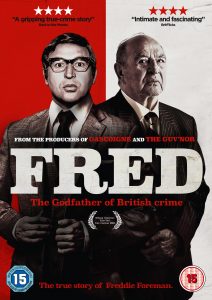 Paul Van Carter (The Guv’nor) spills the beans in this solemn non-judgemental exposé of Kray Twins associate Freddie Foreman – or Brown Bread Fred, as he’s known in the trade. As biopics go this is a stealthy but straightforward affair heavily controlled by Foreman’s brooding and rather swarthy presence as he sits facing Carter, only sharing what he wants to – and that’s not a great deal, in the scheme of things. Most of the detail surrounding this ruthless villain’s bloody past is in the pubic domain, including his part in the grizzly demise of Jack the Hat McVitie – for which he served ten years behind bars, and Freddie openly admits to this. But by the same token, he describes himself as a family man who never really wanted to harm anyone unless they got out of hand. Foreman has been accused of over forty murders, yet he’s not troubled by his gangland past: heartache comes only in the shape of memories of the Blitz and his Wartime childhood. And he certainly has a way with words, and a calm economy of movement when alluding to his misdemeanours, in phrasing that could be described as euphemistic. As a figure he very much calls to mind Bob Hoskins’ character in The Long Good Friday but Foreman has a brutal hard-edged quality that not even Bob could muster in his superlative performance. Foreman blames his criminal past on his impoverished upbringing as one of five boys in London’s Battersea, long before it became posh. And despite his shrewd entrepreneurialism – he went straight for two years in the US and Spain – he still reverted to his recidivist ways: clearly crime runs in his blood, even when the money flowed too. In his 80s and with strained family relations, Foreman now lives in a care home, where no doubt he is getting a taste of his own medicine. MT