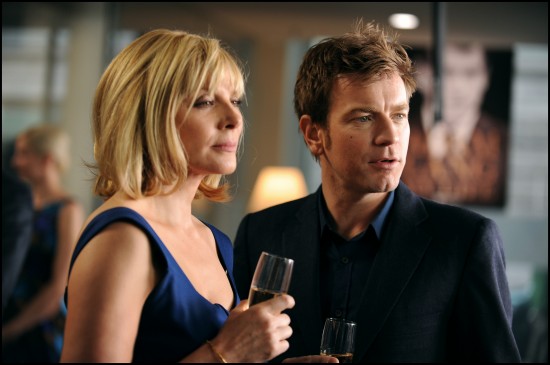 Based on Robert Harris’ novel entitled Enigma, the film came about in unexpected fashion: Polanski was intent on getting a project (also written by Harris) to the screen called ‘Pompeii’; but for various reasons, the wheel came off.  Whilst Harris was working on ‘Pompeii’, he was also tinkering with an idea that had sat with him for over a decade; that of a ghost writer and an ex-PM. But the jigsaw pieces didn’t all fall into place until he saw a news cast talking of someone wanting Tony Blair to be tried for war crimes.

When ‘Pompeii’ got buried, Harris sent Polanski his ‘Ghost Writer’ novel and the clear Chandleresque thriller aspect of it appealed greatly to Roman, who then immediately set to work with Harris to create a screenplay from it.

The Ghost absolutely has the fabric and feel of an old school Hitchcockian potboiler. Terrifically moodily shot by Roman’s long-term collaborator Pawel Edelman in out-of season Martha’s Vineyard, with glowering cloudscapes and windswept, unforgiving deserted beaches. It features a gardener who is a perfect picture in futility; sweeping leaves into a wheelbarrow as fast as it empties itself.

Polanski has here somehow managed to find a corner of Europe in the most unexpected of places. His mantra has always been ’story, character, logic’ and here, in the thriller genre the goal is also the fantastical. It’s what Hitchcock did so well; forcing a man into an extraordinary and escalating series of events, but purely through logical transitions.

The plot isn’t the most complex, but the film is still a tightly drawn bow, with no slack. An ex-PM living somewhat in self-imposed exile, hires a ghostwriter to finish the manuscript of his memoirs that has been started by another writer who tragically drowned by accident whilst inebriated, on the local ferry. And even as he accepts the job, sinister goings-on start to happen to the unwilling replacement.

Pierce is a very handsome, charismatic man and he has let this sometimes overshadow his ability to act. Here, he has a decent stab at playing an ex-PM, heavy on the showman and now hiring a writer to help with his memoirs. McGregor always jars when his Scottish drawl fails to slither and slip naturally out of his mouth and his oddly non-specific English accent lets him down. He has also always been drawn to everyman roles: He’s always seen himself not as a lead, but a character actor at odds with his usual casting.

Nevertheless, The Ghost drives inexorably forwards with both menace and mystery, as the meagre morsels of an answer to the riddle are teasingly, pleasingly tossed infront of our protagonist and we wonder whether he’ll succumb to the baddies before he’s managed to work it all out and found safety. Not one to watch then for the acting so much, but a taut, atmospheric, intelligent thriller nonetheless. AT