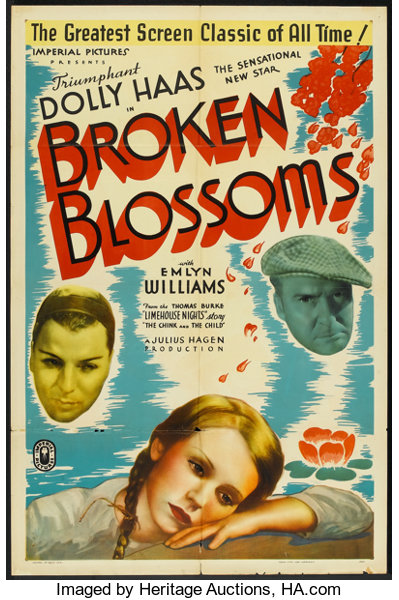 “An effective, if old-fashioned melodrama”: such was the verdict  passed by the not easily impressed Rachel Low, and Julius Hagen’s fanciful remake of the Griffith classic – while yet another step in Hagen’s headlong plunge into bankruptcy – looks good today precisely because it’s so old-fashioned. (David Lean had worked at Twickenham Films during the early thirties, and this film probably influenced his equally stylised Dickens adaptations, particularly the cutaway to a shot of a door banging against a sapling when Battling Burrows takes a whip to Lucy.)

Hagen had originally brought D.W.Griffith himself over to direct the film, but when Griffith proved too drunk for the task Hagen instead assigned Hans Brahm (still using his real name), who cast his soulful-eyed wife Dolly Haas as Lucy; so both leads Haas and Emlyn Williams (also credited with adapting the original) have unlikely accents. (If there’s one thing modern audiences sneer at in old British films it’s the accents, especially if they belong to familiar British thespians like Donald Calthrop & Gibb McLaughlin – both of whom later worked for Lean – pretending to be Chinese.)

Bernard Vorhaus had hoped to direct it but was passed over and fobbed of with serving as technical advisor, so he not surprisingly badmouthed the film that resulted. Brahms also brought in German exiles Curt Courant & Karol Rathaus to light and score the film. Brahms’ later Hollywood version of Patrick Hamilton’s Hangover Square was a travesty of the original but rightly regarded as a classic Hollywood melodrama. His version of Broken Blossoms deserves more sympathetic reappraisal. @Richard Chatten