Two events are celebrating Derek Jarman in London in 2014. “Pandemonium” Exhibition at Somerset House, WC2 and a Retrospective at the BFI 5.2. – 31.3.) 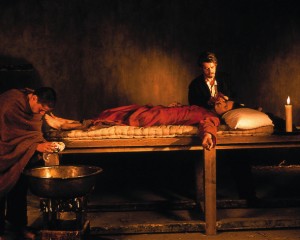 Derek Jarman died twenty years ago at the age of 52 but was undoubtedly the most innovative director of the British cinema in the second half of the 20th century and arguably the greatest visionary since Michael Powell. His films are always the opposite of the traditional English ‘masterpieces’ featuring the heroes of the past – he turned the glorious history into a macabre sideshow. And he was obsessed with death, from the very beginning. And death never comes easy to Jarman’s heroes: SEBASTIANE, the title hero of his first feature (co-directed by Paul Humfress in 1976), dies a slow, agonising death, bound to face the penetrating arrows of his torturers. Needless to say, that for Jarman, Sebastiane was not a Christian martyr, but a gay anti-hero. Ten years later it is the turn of another title hero, the painter CARAVAGGIO to die a horrible fever death in black and blue. The youthful hero in THE LAST OF ENGLAND (1987) dies a small, dirty little death. And death rules the WAR REQUIEM (1988), this time in glowing pink. Laurence Olivier in a wheelchair, as a war hero in his last film role. And in between shots of bombing raids by Jarman’s pilot-father, which he took with his camera in WWII. 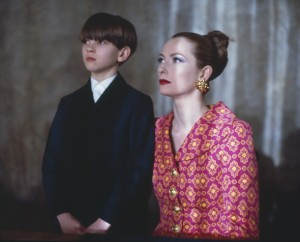 In EDWARD II (1991) the title hero perishes with a red hot poker in his rectum – in the arms of his tender murderer, whilst Annie Lennox sings Cole Porter’s “Every time we say goodbye, we die a little”. Jarman always re-mastered the originals of the classics into something demonic, obscene and really evil: He transformed the magic island from Shakespeare’s THE TEMPEST (1979)  into an labyrinth of terror, and the Sonnets of the Bard into a witch’s Sabbath in THE ANGELIC CONVERSATIONS (1985). And he shows contemporary England – JUBILEE (1977 and the aptly titled THE LAST OF ENGLAND – as an island out of hell – just the opposite of what Margaret Thatcher, with her ideas of a strong, back-to-the-Empire orientated country, had in mind. And Jarman’s own death, foretold with BLUE a year before he died, blind from the medications which did not cure Aids, but a peaceful BLUE nevertheless: a final work without pictures, just words. It is the viewer, who projects his pictures on this film – not uncommon for Jarman’s work, since he was always more interested in the creative process than the result: “The end-product is not important, it is only the witness of a creative process”. 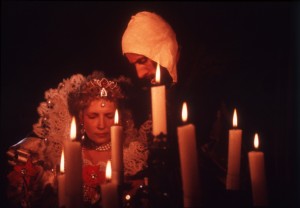 Jarman studied painting at the Slade School in London, but his interest in stage design made him collaborate with the Royal Ballet and the ENO.  His first work for the cinema was the Production Design  for Ken Russell’s THE DEVILS (1970). Then he wandered around London with his ‘Super 8” camera – home movies, but also first documents of the gay community. The difference between fiction and documentation did not exist for Jarman. “Life is Art”, the title of a documentary about Jarman by Andy Klimpton (they met first in the early 80s) is by far the best description of Jarman’s life and work. His garden and wooden cottage near Dungeness was his last refuge, much more than a hobby. Four years after being diagnosed with aids in 1986 THE GARDEN shows a gay couple, being seemingly senseless tortured and murdered, whilst a Madonna (Tilda Swinton) is harassed by paparazzis, Jesus looks on painfully and Judas’ death is exploited as an advertisement for credit cards. 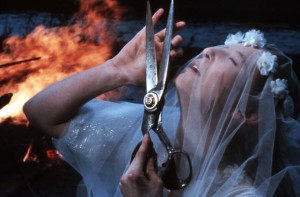 THE LAST OF ENGLAND is perhaps the best example of Jarman’s work, because it is as personal as it is political. The ‘home movie’ fragments, which his father and grandfather shot, show the small world from which Derek was going to escape. We see innocence, but it is only superficial – the “Kodak” family always smiles. But behind the smiles is the soldier father, who repressed his children. When we see little Derek playing ball, the innocence is undercut by the security fences, and we also hear the noise of the war planes in background. Cut to the scenes in Brixton, where police and demonstrators show a new meaning of war: the total civil war. It is a dark portrait of a nation rotting away. If one thinks of an equivalent in literature, one would choose  Baudrillard’s “Kool killer”. The apocalypse is already here, it is happening before our very eyes. The present as future, Science Fiction as the new reality. As proven in JUBILEE, where Elizabeth I asks her court magician to show her the future of her domain, 400 years on, during the reign of Elizabeth II. 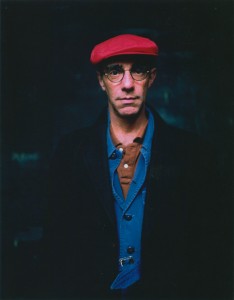 In DEREK (2008) a homage to Jarman, by Isaac Julien and Bernhard Rose, Jarman’s muse, the actress Tilda Swinton (‘Caravaggio’, The last of England’, War Requiem’, ‘The Garden’, Edward II’ and ‘Blue’) reads her ‘letter’ to Jarman ‘in the sky’. She misses his contra-poison to the disco-light of a culture where everything is for sale. And: “Derek, this is what made you a real artist – you worked from your ‘soup kitchen’, which was your life” And in this ‘soup kitchen’ the private, the intimate and the public life touched each other, present and history. Jarman never wanted to build borders between these spheres. Like the painter Caravaggio, who painted a Madonna like a prostitute, and holy men as rent boys.

Derek Jarman was not only a leading figure of the independent British film but also of the gay movement. He fought energetically against Thatcher’s anti-gay policies, like the Paragraph 28, which forbade any information in schools about homosexuality. He was a creative figure, a dreamer, an eccentric and a militant poet with his brush and his Super 8 camera. He was a minimalist too, his WITTGENSTEIN (1993) was shot against a black background. And it is no accident, that the philosopher Wittgenstein, one of Jarman’s heroes, said “that philosophy ought to be written as if it was poetry.” Derek Jarman’s films were always poems, close to the heart. AS