South Korean filmmaker Hong Sang-soo (Hahaha)) shows in his latest film NOBODY’S DAUGHTER HAEWON the unravelling of a personality: aspiring actress Haewon, played by a very impressive Jung Eunchae, has an on/off relationship with an older, married professor (Lee Sunkyn), who is the father of a recently born baby. 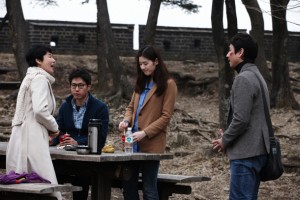 After her mother leaves Seoul for Canada, Haewon looses her last ‘anchor’ in life. Her personality fragments, she sleeps at day time, loses more and more contact with her acting school, drinks too much and flees into a parallel universe, in which she ‘directs’ life via a permanent inner monologue. She can’t differentiate any more between important and unimportant events and wanders off into a vacuum that only her inner voice can fill. Her often hysterical laughter is the only obvious sign of her psychological deterioration, so that her friends find her rather ‘odd’, because they are too self-centred to help and unable to commit to anything but the acute present.

The narrative develops in episodic format, so as to underline the lack of continuity in Haewon’s life. She always visits certain places: mainly a park, a motel and an old fort, as if trying to re-connect with the past, even though it is exactly this past with has thrown her life into disarray. But she is unable to find a solution,because she can’t connect the important points in her life any more and  it becomes totally structureless as she drifts more and more away from herself. She wanders often and long, particularly in the rain, as if trying to purify herself. But since she can’t ask the right questions, or even worse, can’t remember what to ask, all her physical exercises take her even more away from herself. 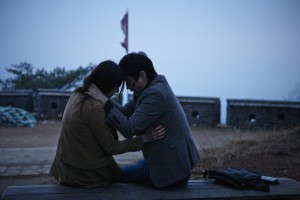 Her relationship with the professor has issues, so does her relationship with an fellow student: everything is in flux. Haewon is the object rather than the subject of Sang-soo’s film – even though paradoxically both men in her life believe her to be strong. She drifts along in a way that makes her loose more and more of her personality.  Sang-soo has selected a muted palette here and most of the drama takes place outside, with a few claustrophobic indoor shots): everything is murky and somehow diffuse,  just like Haewon.  There is a timeless feel to the narrative which could be set anytime between the 70s and today.

The sensation here is one of being dragged along on a slow-moving river, not unpleasantly, but somehow disturbingly. There are no dramatic incidents, everything is more or less of the same colourless grey: a permanent misunderstanding on the part of Haewon, who is floating away into near oblivion. Unable to read her own (or anybody else’) real intentions, she relies only on her internal world to direct herself. She does not say it, but one expects her at any moment to voice the obvious: “I don’t know why I am doing this”.

Hong Sang-soo’s latest treat IN ANOTHER COUNTRY is a quirky comedy drama starring Isabelle Huppert is yet to hit our screens but in the meantime this well-observed portrait of a young women fragmenting under the pressure of her loneliness, low-key but with extreme sensitivity is something worth discovering. A little gem. Andre  Simonoviescz

ON GENERAL RELEASE FROM 11TH OCTOBER 2013 IN SELECTED LONDON CINEMAS