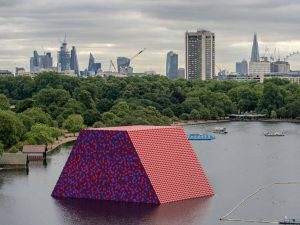 In his thought-provoking biopic, Bulgarian director Georgui Balabanov (The Petrov File) portrays two very different brothers who have been living apart for 26 years on the opposite sides of the iron curtain. Christo (1935-2020), who died on 31 May 2020, travelled abroad to become an celebrated environmental artist and his actor brother Anani Yavashev, who deeply regrets his wasted years in Bulgaria under Stalinist censorship. Two destines embody the hopes and illusions of two different worlds.

Balabanov’s documentary flips between Gabrovo, the village where the brothers grew up, and the Paris flat Christo shared with Moroccan born Jeanne-Claude, whom he met in Paris in 1958. Both not only share the same birthday (13.6.1935), but a passion for art, while understanding that their work is transient – apart from one installation, the 400k oil barrels at Mastaba, all their projects have vanished: the wrappings of the Berlin Reichstag and the Pont-Neuf Bridge as well as The Gates of Central Park in New York.

The busy Paris flat, with Jeanne-Claude chain smoking whilst organising their projects, is in great contrast to Anani’s inertia shared with his artist friends. The Sofia theatre they called home for decades is being torn down and even if they are not too fond of their memories, it is still their past lives, which are bulldozed to the ground. Anani could never play Lenin, since he was “politically not trusted”. The brother’s father Vladimir, a former business man, was imprisoned at the beginning of the Stalinist regime of terror, for “sabotage”. As an old “Class Enemy” he took the punishment for a drunken worker, who burned the cloth production for the whole week. His sons were suspects too, Anani got into drama school only with the help of a benevolent friend in the bureaucratic system.

1957 was the year of decision for Christo, who went to Prague and was smuggled in a locked train-compartment to Vienna. The rest is history – but Anani and his friends, paid heavily for their compromise with the system. Modernism in all art forms was tantamount to treason, painters and playwrights had to smuggle progressive elements into their work – hoping all the time that the censors would overlook it. But they are also honest enough, to admit they had a free reign in their private lives: long, passionate nights are mentioned. One feels sorry for this resigned bunch, and can sympathise with their plight: it comes as no co-incidence that only a few escaped the artistic prisons of the Soviet Block: risk-taking is seen as a virtue in the West either – human nature is preponderantly opportunistic.

Shot in intimate close-up by DoP Radoslav Spassov, La Frontiere is very much a celebration of artistic work represented by Christo and Jeanne-Claude – and a “Trauerarbeit” for the lost souls who staid behind, sharing with others the loss of artistic identity. AS

Tribute to Christo who died in May 2020