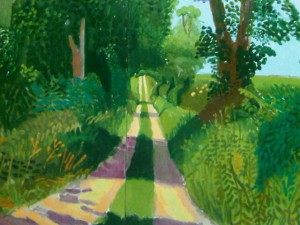 “We grow small trying to be great”.

Born in a tightly-terraced house in Bradford, the fourth of five children, David Hockney’s early memories were of darkness and claustrophobia. It was a happy and aspirational childhood with his strong mother and a father who encouraged him not to care about what the neighbours thought, and fired his imagination and enthusiasm for the world outside with regular visits to ‘the pictures’.

Randall Wright’s portrait of the artist is as ambitious and upbeat as Hockney himself, enlightened by archival material and enriched by cine footage from Hockney’s family collection. Spanning a career that started in local art school and the RCA as a popular and gently opinionated maverick, it shows how he was associated with the Pop Art movement of the 60s, abstract expressionism and figurative work, and is now considered one of the most influential artists of the 20th Century, and the most expensive living artist when his Portrait of an Artist (Pool with Two Figures (1972) was sold at Christie’s for 80 million dollars under the hammer in November 2018. 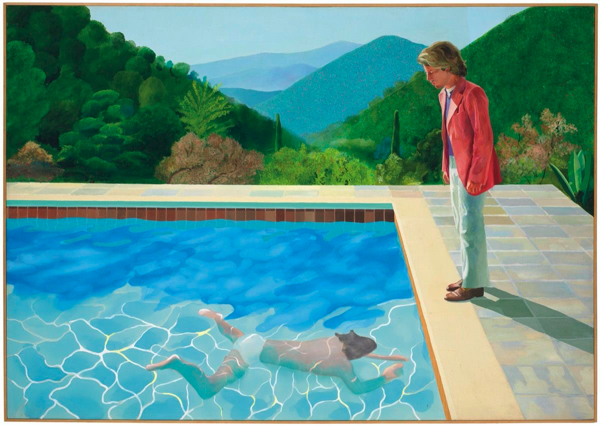 Kicking off with the usual talking heads who share their fondness for the artist contemporaries and American pals (Ed Ruscha who fleshes out a picture of a philosophical thinker, capable of amiable friendship, lively wit and occasional bouts of introspective loneliness: “I think the absence of Love is Fear”). After a sexually and artistically explorative spell in 1960s New York (his blond hairstyle was the result of a Clairol advert on TV), Hockney gravitated to California spending many years developing his technique with acrylics in bright colours, a fascination with the spacial qualities of water and swimming pools led to his most famous work: A Bigger Splash (1967) – the splash took seven days to paint.

Friendships with Christopher Isherwood and his partner Don Bachandry feature heavily during these years along with a love affair for Peter Schlesinger, an art student who also posed for him and followed him back to London where Tchaik Chassey designed a lateral apartment for the couple in Kensington. Embarking on a series of portraits for friends and relatives, we also meet Celia Birtwell who appeared with Ossie Clark in his other well-known figurative painting, Mr and Mrs Clark and Percy (1970/71).

Continually broadening his artistic horizons, Hockney also stresses the intellectual side of art as opposed to photography: “the longer it takes to put (an image) together, the more representative it becomes of time and space”. Hockney also developed an interest in Opera due to his gift of synesthesia, an ability to see bright colours when listening to music. His iPad paintings are possibly his most innovative work with landscape, developing and exploring a spacial awareness unique to painting and allowing us to chart the development of his paintings from the first marks  “the way we depict space and the way we behave in it are different – wider perspectives are needed now”.

Filled with serenity, insight and gentle humour, Randall Wright’s biopic overflows with information, facts and fascinating footage, packing in every subtle nuance of this remarkable creative force in just over two hours.  We are left with a feeling of pride and admiration for our national figure who is as charmingly appealing and strangely naive and this colourful legacy. MT

HOCKNEY: A LIFE IN PICTURES IS ON DVD

In Hoxton, two young men have formed a friendship across the cultural divide Dave (Frederick Schmidt) and his friend Tariq (Aymen Hamdouchi) are wide-boys on a small scale, working for Dave’s notorious East End family.

This gutsy gangland Britflick is the screen debut of Andrew Hulme, better known for his work editing Lucky Number Slevin, The American and The Imposter. SNOW IN PARADISE stands out for its portrayal of an increasingly gentrified East End where the old school crims are slowly being pushed aside by upmarket media types who would rather sip organic beer than chomp bacon sandwiches in the local greasy spoon and a Muslim ‘bruvverhood’ who spend their time preaching peace in the local Mosque.

The film is loosely based on the life of Martin Askew, who co-wrote the script and stars as arch villain “Uncle Jimmy”, a gangland hoodlum. Holding Dave in his thrall with a mesmerising presence, he offers Dave a chance to make some real money with a drug deal – a step up from his usual petty crime. Dave takes the unwitting Tariq along but events turn sour when Tariq goes missing causing Dave’s private demons, coke and crystal meth, to resurface in his life, clouding his vision as he gradually descends into a murky underworld caught between the false bonhommie of “Uncle Mickey” and his rival, the venal “Uncle Jimmy” (David Spinx). His desperate search for his friend eventually leads him to Tariq’s Mosque, where he is welcomed by the faux sincerity of Amjad (Ashley Chin).

As gangland Britflicks go, SNOW is a gripping and watchable thriller and certainly a cut above the rest but the problem lies with the character of Dave. Good-looking and cockily self-assured, he certainly cuts a confident dash in the opening sequences but then completely falls apart on Tariq’s disappearance, despite sexual and emotional support from his girlfriend Teresa, whom he openly adores despite her sideline in sexual favours. Sceptical and almost derisory at first about the power of Islam, Dave then appears to openly embrace the faith without a by-your-leave, making his character both implausible as a hardened petty criminal and a born-again, enlightened soul. All this is viewed through a trippy haze of stylised visual flourishes and a hypnotic soundtrack that occasionally serve to blunt the narrative rather than sharpen what could be a brilliantly hard-nosed thriller with some really first class acting, particularly from Askew, David Spinx and Frederick Schimidt in the volatile lead.  With a little more focus on Dave’s religious conversion (be it to Islam, Buddism, Christianity or any Faith) and what it actually means and stands for in the scheme of things, this cracking debut could have been a good deal more convincing. As it stands, SNOW IN PARADISE is nevertheless a worthwhile contribution to the British gangland genre making Andrew Hulme a directing force to be reckoned with. MT

OUT ON GENERAL RELEASE FROM 13 FEBRUARY 2015