Both the dog and his master are being tracked by the authorities in Closed Curtain, Jafar Panahi’s oblique existential piece of meta filmmaking from contemporary Iran which follows on from his documentary This Is Not A Film.

Opening with an extended static shot of a seaside wind 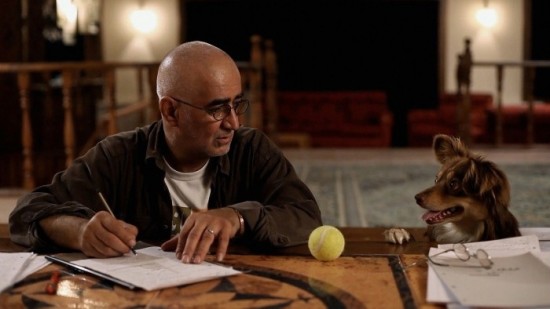 ow barred by security gates, it’s a sober and bewildering set-up brought to life only by ‘the man’, played sensitively here by Panahi himself, and his lovely little dog who he is at pains to hide in this modern villa on the shores of the Caspian Sea.  When a strange couple appear from nowhere pleading to be given shelter a reign of attrition sets in with each character eyeing the other suspiciously and the dog aware that something isn’t right.

With its ambient feel of menace, Closed Curtain is a disorientating film that alienates its audience and generates a strong feeling of claustrophobia as, understandably, it never moves outside the villa but is nevertheless atmospherically shot in a palette of soft seaside hues and terracotta: you could almost be on the Mediterranean were it not for the echoes of ambient hostility from local Police and some intruders who ransack the property. Our sympathies lie with the gentle man and his clever dog rather than the passive aggressive provocative who has purportedly attended a party and is seeking refuge from rebuke.

What develops is exactly what you imagine would happen if you asked a group of students to produce a film about creative expression in a repressed society: heavy-handed and amateurish in style. Not one of Panahi’s stronger outings then but considering he was purportedly under house arrest for “committing propaganda crimes against the Iranian Government” not a bad effort and certainly worth watching for devotees of this inventive and resourceful director’s work. MT

INTERIOR. LEATHER BAR was inspired by William Friedkin’s original drama CRUISING (1980) that saw Al Pacino’s rookie policeman ‘going underground’ in search of a gay serial killer in New York.  In order to pacify the censors, Friedkin cut 40 minutes of salacious footage from CRUISING and this has never been seen in a public screening.  So this experimental collaboration between Franco and Mathews attempts to re-imagine the missing footage with a  look at how male gay sexuality is portrayed in film.  The resulting docu-fiction outing mixes reality with fantasy in contemporary LA.  The piece has a loose and laid-back vibe to it as Franco tries to coax his lead and friend (the very heterosexual) Val Lauren, into a gay bar to help him in his mission to scope out the full spectrum of gay behaviour from cruising to sex within a committed relationship. His reactions to overt gay males all butched-up to the nines in leather bondage gear  are revealing as he states after the first day’s filming “I’m not the same guy as I was this morning”. 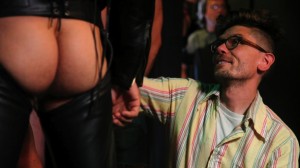 Naturally Val Lauren is rather back-footed by the whole project and this comes across in spades, as is intended by Franco. The two engage in endless banter and displacement chat about his role as a straight man entering such a premises in the 1980s. He seems uneasy about it all and chats to his girlfriend on the mobile, for re-assurance.  Allegedly this dialogue is scripted but it has such an authentic feel to it that one can’t help thinking that most of it was ‘ad lib’.  The essentially waffly dialogue is intercut with stylishly ‘re-created’ scenes of how Franco imagines the lost 40 minutes of original film footage may have played out back then and offers a provocative and erotically-charged twist to the proceedings with some ‘no-holds-barred encounters between cruisers and a couple who are in committed relationship.

At just 60 minutes this latest Franco outing is not long enough to merit a full theatrical release but nevertheless merits a watch if it comes to a film festival or one-off screening near you. MT

DVD ON SALE 9TH DECEMBER WITH EXTRAS: FEAST OF STEPHEN – A SHORT FILM BY JAMES FRANCO