Mountain films during the Weimar years: Beyond your Wildest Dreams 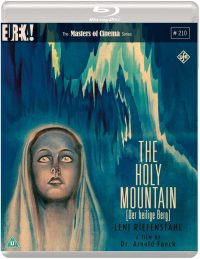 In spite of a new revisionist film history, which tries to exonerate the BERGFILM sub-genre from its close connection with Fascist ideology, the filmmakers of the Weimar years and their chosen subjects were close allies of German Fascism – and Leni Riefenstahl was arguably its leading film propagandist. Attempting to link the Bergfilm with what Kracauer called “Streetfilms”, is aesthetically and content wise a dishonest bid to rewrite (film)history. Streetfilms were set in big cities where the male protagonist falls for a sexually alluring woman from a lower social class, only to be roped back to roost in his middle-class milieu by figures of authority. The Bergfilm might feature alluring women (Riefenstahl certainly qualified), but the narrative comes to very different solutions, and this is amply demonstrated in Luis Trenker’s The Prodigal Son (Der verlorene Sohn, 1932), which sees the hero falling for an alluring ‘foreign’ woman, who embroils his in the traumas of big city life before he escapes triumphantly back to his home in the mountains to become an upright citizen and family man. You don’t have to take my word for it – Dr. Joseph Goebbels wrote in his diary during a visit to the mountains: “That was my yearning; for all the divine solitude and calm of the mountains, for white, virginal (sic!) snow, I was weary of the big city. I am at home again in the mountains. I spent many hours in their white unspoiltness and find myself again”. 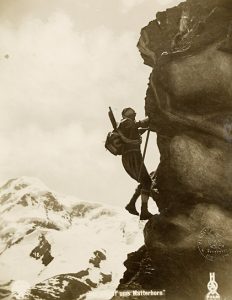 There is a strong link between Anti-Urbanism, unspoilt elements of nature, destiny (in German ‘Vorsehung’, Hitler’s favourite phrase) and a surrender to irrational values: exactly the cinema which Kracauer describes in his ground breaking text. Yes, there was modern technology: telescopes and microscopes – and airplanes. But one look at Riefenstahl’s films of the Nazi Party get togethers in Nuremberg (Sieg des Glaubens, Triumph des Willens) shows the underlying irrationality: after we have seen the city full of “believers”, Hitler comes down from the sky in a plane. A demi-God, winged like in Greek mythology, he flies into the world to make it sane (heil) again. In German the phrase of ‘heile Welt’ is still used to define a system without any contradiction, perfect by definition. In comparing the Nazi regime with eternal nature, all clean and sane, its opponents are immediately categorised as unclean. In the case of Jews, they were vermin, to be eradicated.

Director Arnold Fanck (1889-1974) can be called the father of the Bergfilm. His features with Leni Riefenstahl (1902-2003), a former ballerina, are the bedrock of the sub-genre: Der Heilige Berg (main picture) in 1926), Der grosse Sprung (1927), Die weisse Hölle vom Piz Palü (and its sound remake in 1938); Stürme über dem Montblanc  (1930) and Der grosse Rausch (1931). In 1932 Riefenstahl became star, producer, director with Das Blaue Licht, written by Bela Balasz. Balasz, often called a progressive, was anything but. He might have been, perhaps, politically on the opposite end of the spectrum from Riefenstahl, but his aesthetics were very much influenced by Stalin’s realism which censored and destroyed the directors of the early post-revolutionary era. And it’s no coincidence that in Fall of Berlin (Mikheil Chiaureli, 1950), Stalin (all in white) would also come down from the sky in a plane to greet his followers like a Messiah.

As far as the Die weisse Hölle vom Piz Palü is concerned, it was described by a contemporary critic from ‘The Frankfurter Zeitung’ as having a “seductive force, the mysterious power of the mountains, forcing people into inescapable dependency. The mountain rages, and demands sacrifices”. What it does fails to mention is that Riefenstahl’s Hella comes between two men, ending their friendship and forcing the aforementioned sacrifice. Here the mountain is shown as a noble monster, very much like the dragon in Siegfried. 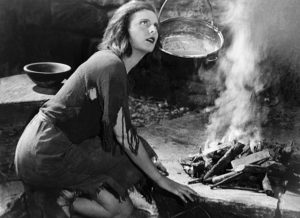 Das Blaue Licht won an award in Venice and convinced Hitler that Riefenstahl should direct the Nuremberg rally documentaries. A post war critic in the ‘Cine-Club de Toulouse’ wrote in 1949, picking up on the Siegfried theme: “It is the always eternal topic of Siegfried, as the young hero. Because always the young men are ready to sacrifice their lives, and only have contempt for everything, which does not omply with their ideas. This is a feature seen entirely from the viewpoint of Nazi ideology. We find the same sort of youth enthusiasm seen in Riefenstahl’s Nuremberg documentaries. Young people joined in with the hope that the regime would reward them because of their racial purity”.

A German critic in 1932 had a very different impression: “A slow journey of images like in the fables of old, like paintings, composed in magical light. Leni Riefenstahl looks magical and almost surreal, a creature not from this planet, but a Mountain Fairy. She alone is enough to give this this feature an otherworldly, touching charm.”

And then the Mountain Fairy came down from her world, and staged the Party Congress. AS

BEYOND YOUR WILDEST DREAMS | MOUNTAIN FILMS FROM THE WEIMAR ERA