Hannah Arendt, the eponymous real-life subject of this well-meaning biopic, was a political theorist who studied under a series a great twentieth century philosophers, including Jaspers, Husserl and Heidegger. Born in Germany in 1906, the Jewish Arendt fled her home country amidst the rise of pre-war anti-Semitism, finally settling in America. Among the many important works Arendt would go on to produce were The Origins of Totalitarianism and Eichmann in Jerusalem: A Report on the Banality of Evil, about the trial of Adolf Eichmann, a lieutenant colonel in the Nazi  HYPERLINK “http://en.wikipedia.org/wiki/Schutzstaffel” \o “Schutzstaffel” SS who oversaw the deportation of Jews from Germany. It is Arendt writing the latter work which forms the basis of Hannah Arendt. 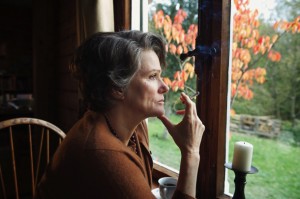 After persuading The New Yorker to send her to Jerusalem to cover Eichmann’s trial, Arendt is overcome by Eichmann’s sheer ‘mediocrity’, and unable to reconcile this with the ‘greatness’ of his crimes – thus leading her to develop her concept of ‘the banality of evil’. Expressing the concept in her New Yorker piece, alongside some ambiguous comments about the conduct of Jewish leaders during the war, Arendt unwittingly unleashed a tidal wave of controversy. As her friend Hans Jonas says in the film, Arendt turned the trial into a philosophy lesson, using it to raise important questions about the nature of evil. In reliving the story and controversy behind Arendt’s piece, Hannah Arendt shares these preoccupations, transferring Arendt’s ideas from the page to the screen. 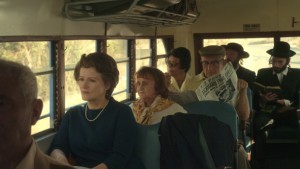 The film’s key themes are neatly summarised by the darkness of the film’s opening, which shows Eichmann’s capture followed by a scene of Arendt smoking and thinking, lying alone in darkness – an apt visual metaphor for what’s to follow. And in perusing Arendt’s thoughts, the film seems to posit that her attempts to understand Eichmann were at least in part also an attempt to understand how Heidegger, her former mentor and lover, could have likewise become a member of the Nazi party.

It’s a very human motivation for a woman who was criticised for being ‘all arrogance and no feeling’, as one character says here. In attempting to try and show us Arendt’s mind at work, it could be argued that Hannah Arendt likewise fails to truly engage feelings. There are attempts: quickly sketched friendships and romantic exchanges, and yet when health troubles strike for both her husband and an old friend, neither moment carries the necessary dramatic impact. We’re constantly told how great Arendt is (students fawn over her, the editor of the New Yorker claims ‘she wrote one of the most important books of the twentieth century’) – and yet, as portrayed in the film, her humble, human side never feels truly exposed. Though we see her criticised and hounded, it feels like the film presupposes our sympathy, assuming Arendt’s likeability without the need to actually show it to us.

Thankfully, the power of the story,  and the ideas ultimately win out, the film becoming powerful, gripping and thought-provoking. But it’s a shame that the film never engages emotions quite as successfully as it does the intellect. Alex Barrett.

HANNAH ARENDT IS SHOW AT THE EVERYMAN HAMPSTEAD, TRICYCLE KILBURN. WATERMANS ART CENTRE BRENTFORD, CURZON RENOIR and IS NOW OUT ON DVD