After the success of Waltz with Bashir director Ariel Folman has filmed Stanislaw Lem’s 1971 novel “The Futurological Congress” with an even more stunning result in this psychedelic animation. In the first forty minutes of aesthetically straightforward action, Robin Wright stars as an actress with a conflict: sell her identity and secure the future of her children, Sarah and Aaron (who is suffering from a rare disease), or be herself and suffer the consequences of any Hollywood actress over 40. A tough choice for any woman. 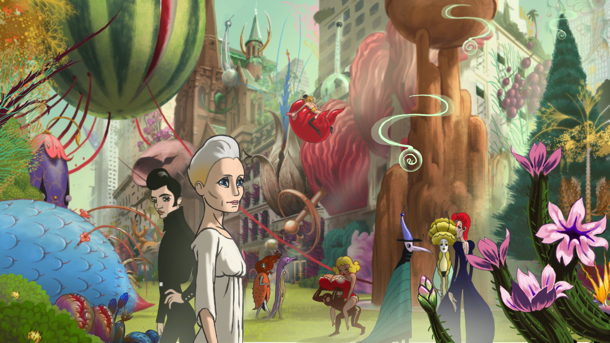 Her agent (Keitel) wants her to give her identity to the film corporation Miramount: as a scanned “product” she can be used in any film to be shot in the next twenty years. Miramount boss Danny Huston pressurises her eventually into signing and makes good use of her in countless B movies and TV series. After twenty years on the shelf an aged Wright is invited to the Congress of the title, where her future ‘career’ will be discussed. On entering a special zone, she (like the majority of the human population) takes a sniff from a vial – and the world changes into an inferno of glaringly coloured animations, in which everything is possible. 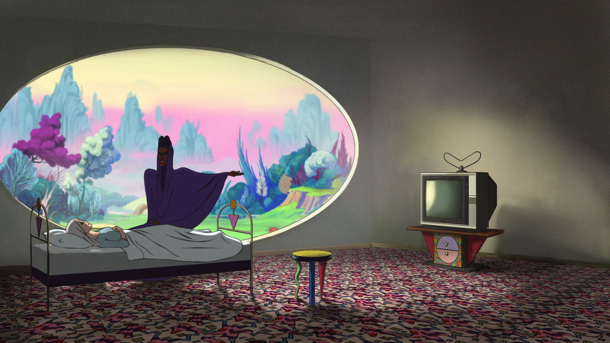 The answer for this radical aestheic change is easy: the pills have got better, Prozac is passé, the vials give everybody who uses them the identity they want; Marilyn Monroe, Dracula or Superman/woman in cartoon form. Only snag: you can never go back into the real world and be your real self. As it emerges, only a few believers in truth and identity live in the old world: drab, grey and full of poverty. Searching for Aaron (she has already lost Sarah to an unknown new identity), Wright, thanks to a special pill, wanders between the two worlds.

In an horrific parody to our current world of call-centres and diminishing personal engagement, everybody here is degraded to a gigantic cartoon existence, where life follows the dramatic rules assigned by ‘Disney’. But most people love this dream which panders to and embraces the growing cult of celebrity; allowing characters to assume the starring roles in movies, even if they are only animated ones. The contrast between the outsiders in their miserable Third World existence and the trippers of the entertainment world could not be greater: The shocking, strange, and action-orientated colour cartoon versus the black and white doc realism. What price a soul, if you can be everything you want to be in colour and Technicolor? A melancholy dystopian adventure that envisages a post Covid future even more frightening and bleaker than Orwell’s 1984. AS

THE CONGRESS IS NOW ON MUBI